Besides having an interesting surname, (“haas” meaning rabbit and “broek” meaning pants), Jaco Hassbroek’s name and art is spreading fast around South Africa. Born in Pretoria; Jaco now lives in Cape Town, doing private and commercial work for various clients and businesses as an illustrator/designer.

Since graduating from Stellenbosch University in 2007, he is still an up and coming artist who has become synonymous for his quirky 2-dimensional characters (who sometimes give sweet and clever punch lines), and his plush felt toys. His unique characters and toys have been in high demand, and have somewhat become his signature style here in South Africa. He has done wall murals for various little businesses here in the Cape as well.

His art works are overall “inspired by nature”, but they also resemble those funky little 8-bit characters from the early T.V games! His work mainly constitutes of bold lines and flat colours that are transformed into delicious little worlds which reflect those profound emotions and experiences in life. 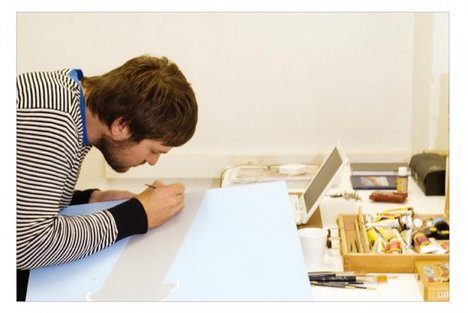 A little about your background: Where and what did you study, and where are you based now?

I studied Fine Arts at the University of Stellenbosch, South Africa. I am originally from Johannesburg, but now I live in Cape Town.

You paint. Describe you influences for your art work. What else inspires you and what’s fuelling you now?

I think my main inspiration is from nature. There is so much beauty in the natural world, and I feel that all our creativity comes from God. It’s in those moments when my creativity flows freely that I feel most inspired. I am also inspired by music, language and by other people and their creations. 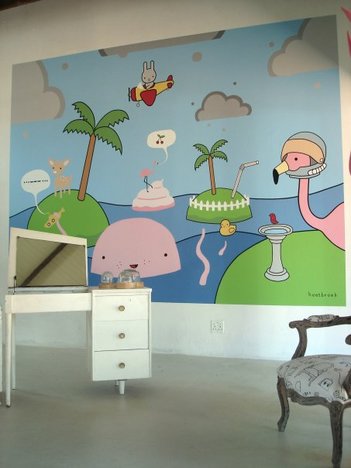 You had your work displayed at Cape Town’s Salon 91 “No Strange Land” exhibition. Talk about the works you did for that.

The paintings I made for the show focused on the idea of land, or the physical spaces around us; be it real or imaginary.

The painting ” Six and Out” is about the feeling I used to get when I would have to fetch the ball I was playing with from a neighbor’s yard. (In backyard cricket, if you hit the ball over the fence you were given six runs, but you were also given out). It’s right next door, but yet it seemed so foreign. It was a very strange feeling going into someone else’s territory.