It is the middle of Feburary 2009, and we are at midwinter here in Sapporo. The roads are walls of piled snow and sidewalks make every look like poor skaters. To me, it is quite impressive and fantastic scenery – snow is piled up everywhere, on a saddle of bike, a oil tank, a store sign, even on a man on the street, though it must be nothing to make a fuss over for local people. 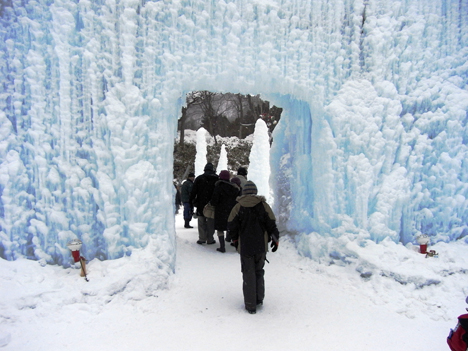 The Chitose-Lake Shikotsu Ice Festival, one of the most popular events in winter in Sapporo, took place for approximately 2 weeks in the depth of winter, from the 30th of January to the 15th of February. The sculptures, created by sprinkling and congealing water from neighboring Lake Shikotsu, were gleamed in natural blue in the daytime, and were beautifully illuminated with different colors of lights at night. The scrupulously finished iced objects were like limestones which were formed over millions of years. 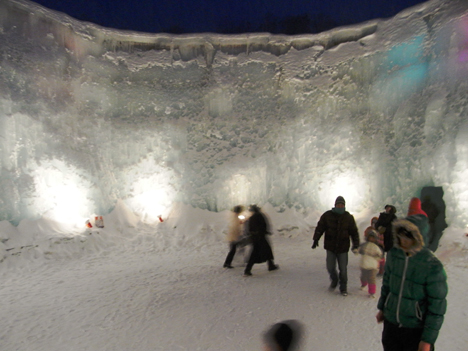 However, according to the nature of ice, they would undeniably melt away in the course of time. All the more, there you can experience the brief moment of nowhere else. The illusory sight of this festival reminds us of “the beauty in fragility”, which all of us might have at the bottom of our heart. 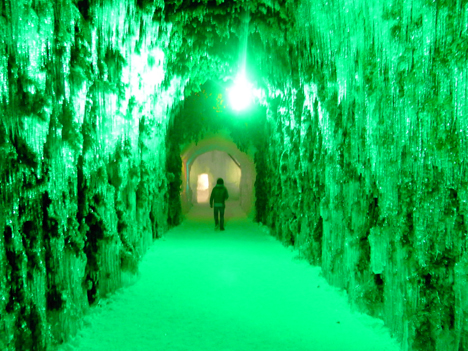 Illuminated with the colorful lights, most of the ice sculptures had enough space inside for us to enter. I didn’t know why but it was fairly warm inside, where you might remember Kamakura (a shelter made of snow) and have the sense of being enveloped by something large and strong. Faced with the random patterns and translucent blue, all we could do was to release a sigh in awe. The elements inside the object, such as illuminated ice, cold air, and the echoing voice of a child, were all creating another world amidst the weaving lights and shadows. 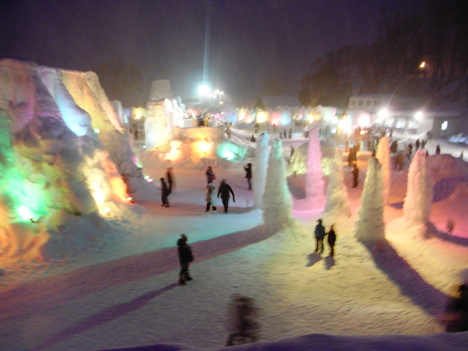 The very cold day evoked a distant memory of my childhood. The weather reporter on TV predicted snow for the following day, and I went to bed with a pounding heart. When I got up early and opened the curtain to find a stretch of snow in front of my eyes with great delight. Putting myself in ski wear immediately, I played with family and friends. The festival clearly brought back my childhood memories which made me feel nostalgic. It was such a fine day in the white winter.