Eric Siu, a bright young artist from Hong Kong, graduated from City University and has been teaching Media Arts for 2 years. His creative mind brought him to New York in 2007, with the support of the Asian Cultural Council, as a resident artist at the 18th Street Arts Center in LA and at Location One in NY. His interactive work sensually marriages technology and human senses into a new level of experience. One of his honorable films “Sliding White” was shown in WRO Portland in 2005. His other works have also been shown in USA, Australia, Japan, Korea, Germany, and China. 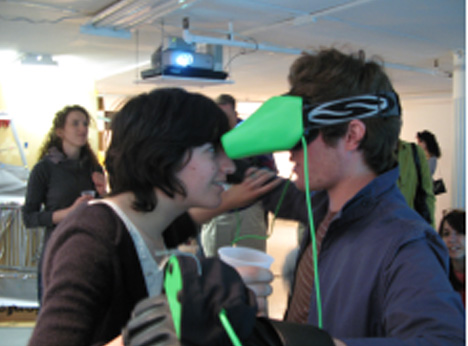 What made you start making video? Why media? How did you get into it?

Back in high school, I was into drawings, especially comics. Then my interest floated onto animation when I became a student at the Institute of Vocation Education (where I also taught for two years from 2005). Out of the 3D concept form the 2D drawing canvas, I started to explore the 4th-axis—time, which I felt fulfilled my creativity more than traditional media. After the institute, I did my undergraduate program in the School of Creative Media at the City University of Hong Kong, where I started to make video and animation in a more artistic and experimental way. I am interested in exploring the concept of “media art” to carry out experiments to define specific meanings to the medium. 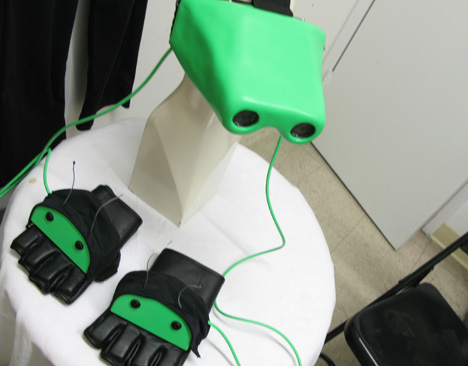 “eeyee” is one of your latest projects, what do you want to bring to your audience/user?

“eeyee” is an extended version of my former project “Optical Handlers” that employs the concept of stereoscopic visual illusion to create a pair of mobile eyes with three-dimensional sense. The new device consists of four LCDs and four cameras rather then two as a set of the first version. Four LCDs are arranged as two in a pair, which are placed side-by-side in the front of the right and left eye separately. Eventually mobile stereoscopic vision becomes possible when the brain functions normally under this setting. “eeyee’s” goggles are equipped with an identical pair of LCDs that faces outward for the bystander to see through “eeyee’s” eyes, encouraging social interactions.

In a word, this work frees our vision from our body, where our eyes are permanently on our skull and our experience of seeing is a lifelong habit. From this work, you can experience your vision through technology by hand control/mobilization. 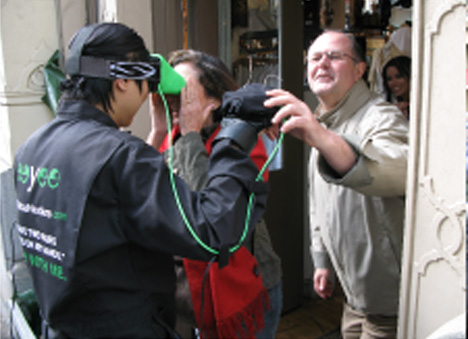 This work provides the user a visual experience that they have never had before. I want to draw people’s attention and observe how they react to “eeyee”. I hope to give people an unexpected joyful intervention that encourages their thought. For instance, a husband of a couple held my hand/eye to cheer his wife, who was seeing through me. Some others even gave me suggestions on of how to practically make use of it. I consider it as an ongoing research project, which transforms through time.

What is your vision?

I think art can help me understand myself more. I am interested in finding from my work, the logics of my thought, which are recursively expressed, and I hope that would eventually communicate with the public.