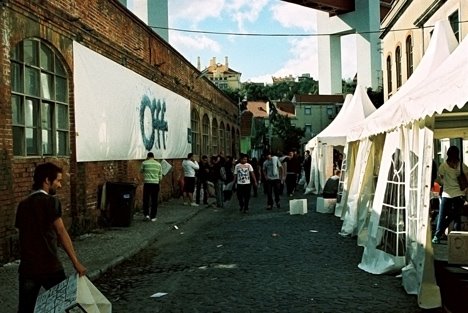 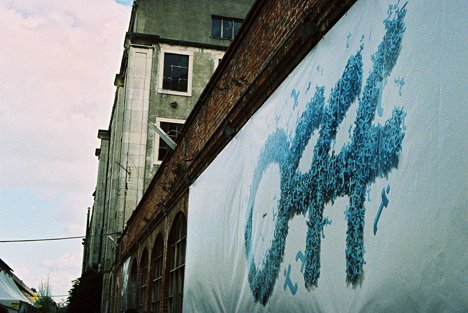 The eighth edition of the OFFF festival is going to take place in Lisbon. After 6 editions in Barcelona, one in Valencia and two extra editions hosted by NYC and Mexico (canceled at the very end), OFFF 2008 organizes a new festival in the LX Factory, an industrial building located in Alcantara, by the Tagus river. LXF is currently under restoration where once stood “Lisbonense Threads and Fabrics Company”, one of the most important manufacturing plants of Lisbon’s History. 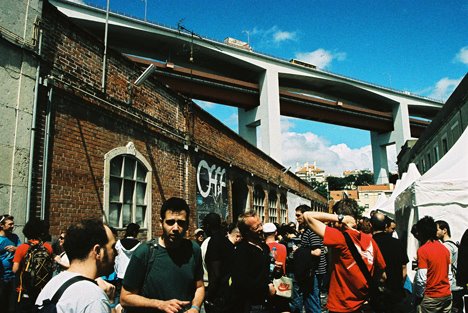 Outside the LX Factory (Mercadillo tents at the right)

The festival has almost an identical structure as in the previous editions. “Roots” is the core of the festival with the main stage where conferences, presentations and performances take place; “Loopita”, a place for experimental electronic sounds; “Open room”, dedicated to new emerging names in the digital scene; “Cinexin”, showcasing the OFFF film festival selected films and special sessions and retrospectives from the best names in animation and motion graphics; “Showplace”, the main exhibition of the festival; “Mercadillo”, a shopping area; “Machina”, a computer room with internet access; and “Chillax” a place to chill-out and relax next to the bar. 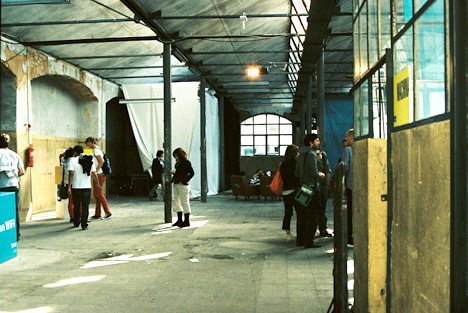 As the doors open, I can first appreciate the underground style of the building which reminds me of some clubs and art venues in Berlin. Unfortunately, doors open a bit too tight on time, and after waiting in queue, I am too late to see the opening act. The LX Factory is a big building which offers a continuous space for the main festival’s activities: Roots, Loopita, Open room and Showplace. The Chillax is located in between while the shopping area is outside the building and accessible to everybody.