I often heard severe criticisms against this Lyon Biennale: ”only the too strange and intelligent part of contemporary art stood out.” Come to reach back in mind if there is anyone who were appreciated for the beauty of art, they seemed to be only Ranjani Shettar, Keren Cytter, and Mai-Thu Perret. One reason why visitors could not help feeling something like conceit of young curators was the relentness of collection of works whose concepts were really pursued of, or other was that the works were displayed in bunches, not respectively, while the paintings for a decade must earn its place in art market. 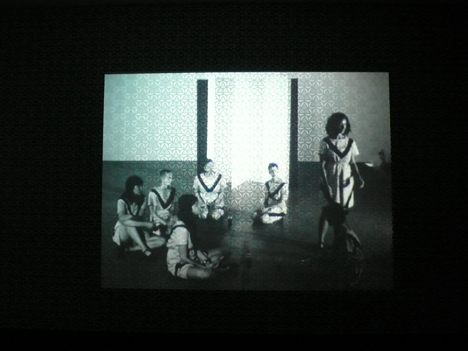 What deserves special mention is, on the other hand, the borderless selection from their address book having been a long while cultivated. 20 years after “Magiciens de la Terre” held in Ponpidou Center, France in 1989, the multiculturalization in art having been proposed, they seemed to succeed in having their answer to the attempt to show, from the same point of view as the West, the art existing in countries other than the West, the center of art.

Attempts like this have been made in several exhibitions, such as in several exhibitions such as “Partage d’ exotismes” exhibited in Lyon Biennale in 2000 by Jean-Hubert Martin who is the chief curator of “Magiciens de la Terre”, in “AFRICA REMIX”, and in the last year’s first entry of Vennice Biennale to African pavilion. However, they were undeniably felt like the World Exposition from late 19 to early 20 century.

In this Biennale, it didn’t matter that it was held neither in Lyon nor in France, that is, as the large modern museum in New York and a gallery in Nante, France were treated in the same way, the art generated in the world were exhibited, being unconnected to topographical significance. And, such movement can be seen in the foundation of ourdecade.com where you can join the study to define the past decade from all over the world, in the similar way to Wikipedia (even if there are few participants in this project).

It was neither in modern museum, in Lyon, in France, in Europe, nor a biennale by those curators who was chosen by Moisdon and Oblist, but was one where visitors could feel the endless spread.