This month’s Shift cover was designed by Carlos J. Gómez de Llarena. Carlos has been pursuing his creative activities under the name, med44. Gómez works on a variety of media from web-based art work to public installations where he explores different relationships that works can have with the audience.

We interviewed Carlos about his projects and how they have been evolving over the years.

I have a really long name: Carlos Javier Gómez de Llarena Figueredo – and I could keep going. I was born in Caracas, Venezuela and I have been living in New York City for the last eight years.

I present myself as a media architect since the term loosely groups my work and areas of interest. I originally come from an architecture background but I’ve worked in broadcast, digital advertising, interaction design and creative direction.

You work on your projects in various media such as web, films, public installations, games. Please introduce your representative works.

I started doing work with new media while I was still at architecture school. At that time I was interested in the overlaps of film, architecture and video art, which became the subject of my thesis. In 1997 I had the idea to make a video mosaic of my city and proposed it to a museum as an immersive art installation. The resulting piece was Visionary CCS and I had three months to shoot and produce it from scratch. 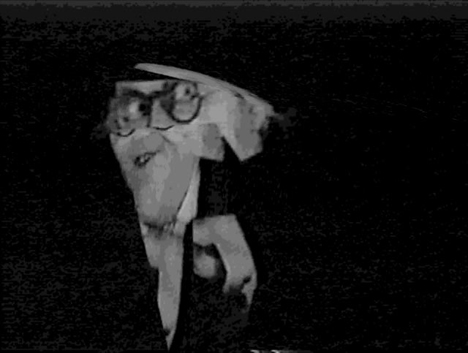 In years following I got into animating, compositing, designing sounds and making loops for VJ sets. I started performing in raves, mixing 2D animations with video games and footage I shot. I made another short film called Videopsychosis which juxtaposed some of these loops with quotes from prominent visual culture theorists that influenced my thinking at that time. 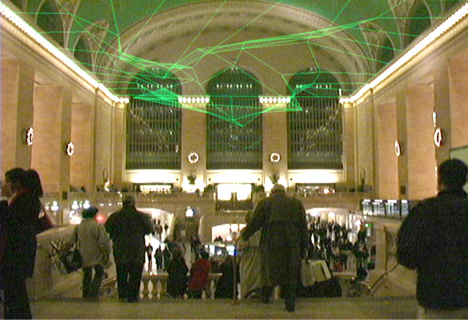 In 2000 I came to New York to begin studies at the Interactive Telecommunications Program (ITP) of New York University. I was interested in exploring how my background could be combined with the interactive technologies I was learning. In reading about technology, telecommunications and urbanism from William J. Mitchell and the research work that Anthony Townsend (one of my professors at the time) was doing, I started realizing that ubiquitous computing would become another architect’s tool in the future. It would allow for creation of spaces and designs that change our perceptions of built environments and social relationships. I thought of this as “media architecture” at the time and produced another video, Parallel Space, which envisioned some of these new data-driven urban interfaces and architectures. 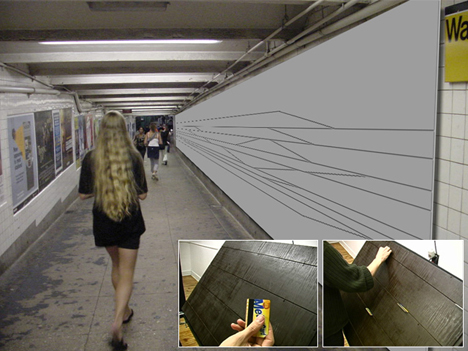 During the remainder of my Master’s degree studies I focused on trying out these ideas in physical space. I did a series of media architecture prototypes, for example the Swipe Wall. This installation for the hall of a subway station allowed commuters to spontaneously make music by swiping their Metrocards through slits in the wall sculpture. Projects like Vectorial Soundscape or Scope challenged established perceptions of public spaces such as subway stations, a lobby, or the street across from a museum. At ITP I also learned to embrace collaboration with peers, far more than in architecture school, and some of the projects I did were the beginning of a series of ongoing multidisciplinary collaborations in my career. 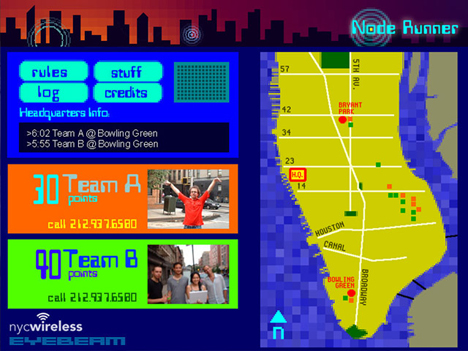 Upon completing my Master’s degree, I had the opportunity to work on an outdoor urban-scale project exploring wireless interactions for an art workshop. The idea was to come up with a game using the new wifi hot-spots that were starting to crop up all over New York in 2002. The organizer of the workshop was Eyebeam and NYCwireless and for this project I teamed up with Yuri Gitman since we both shared interests in wireless, cities, and game design and had worked before. The end result was Node Runner, a competition game that placed two teams in a race to connect to the most hotspots in two hours. The team members had to submit photographic proof of the hotspot locations to a blog as they raced from one departure point to a finish line.

That year I got a job working for R/GA on a new project for Nike called Nikelab. It was a pitch when I started, but the company won the project and I ended up doing the interaction design for the four different versions of Nikelab that were launched between 2002-04.