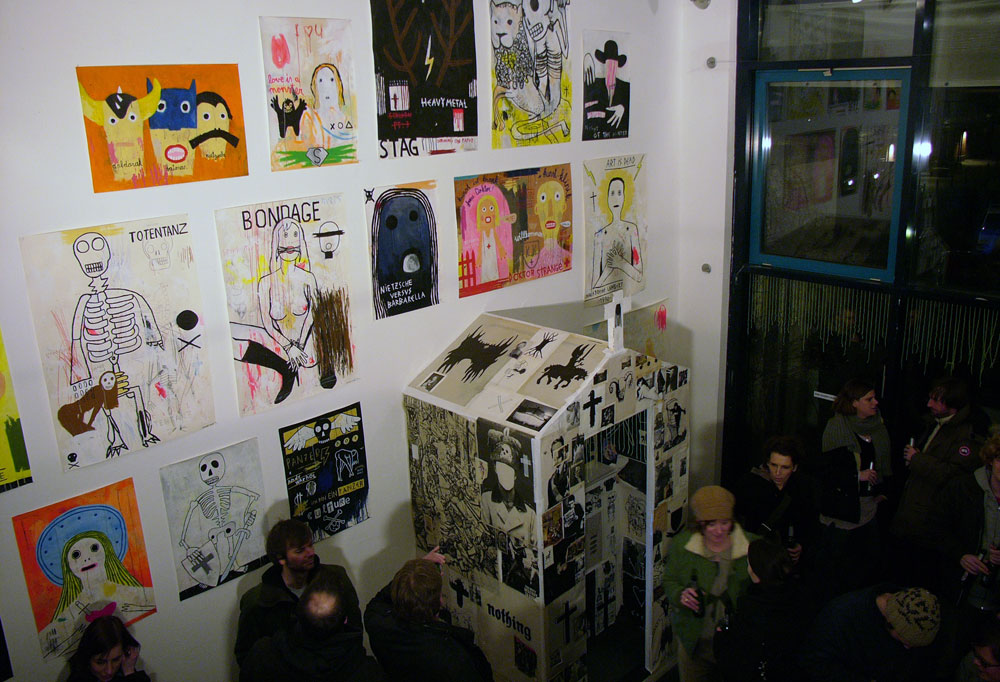 The five meter high walls at heliumcowboy artspace are studded with various artwork. Paperwork next to canvases, small images next to large ones. Some are dark, some blaze with fluorescent colour. Right after entering the gallery there’s a chapel on your right side. It’s covered by yellowish paper fragments from top to bottom. There are crucifixes, very well. But what’s that naked woman in patent leather boots doing next to the well-known churchy symbol? Thanks to the artist they find common ground because he treats everything the same way: disrespectfully, but with a certain amount of affection. That way citations from both the porn and the clerical background melt together harmonically, although their only similarity is that they’re black and white on parchment-like paper. 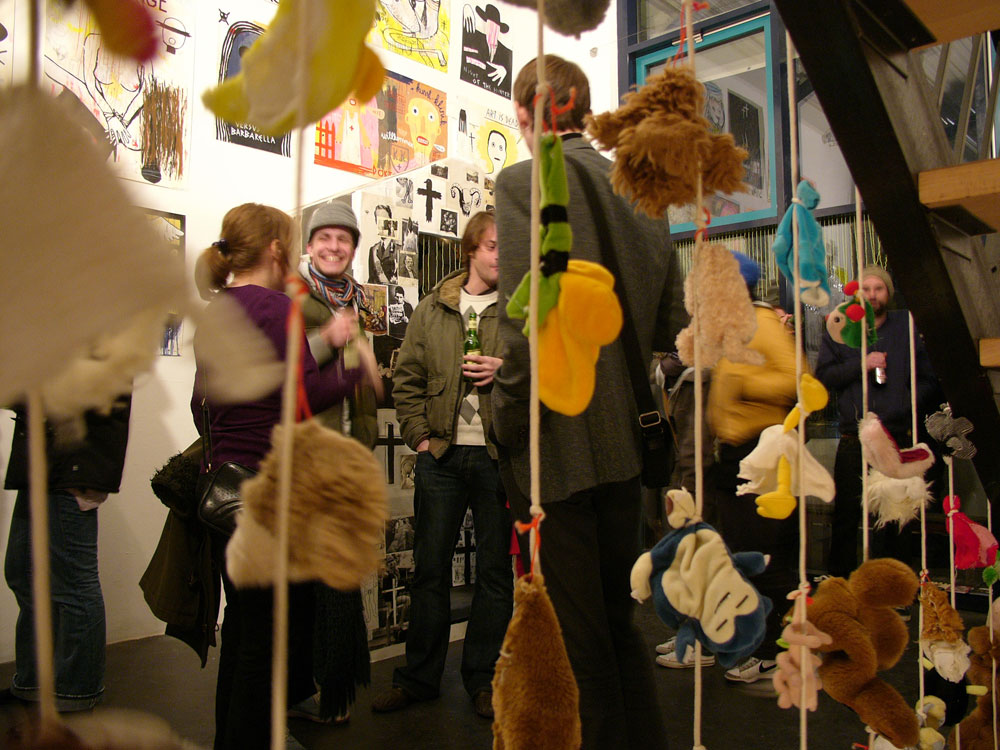 The altar is built around a television where the melting and merging of symbols and figures from various context is reproduced as a film. It seems there’s a new cult emerging, that doesn’t care about what is regarded as good or evil, ridiculous or serious, high culture or trash. This cult combines everything: it’s chaos cult!
But although the exhibition might look chaotic the title of the exhibition reveals the truth: “Chaos imminent” — imminent chaos. The artwork of Christophe Lambert, self-taught artist from French-speaking Switzerland, is always on the brink to chaos but the chaos never really arrives. You can feel the thunderstorm coming up, constantly. The show radiates a thrilling feeling that there’s something exciting going to happen right away. It’s the same excitment you’re feeling before going out. Since the evening has not yet begun, everything is possible, there’s nothing but anticipation and speculation. 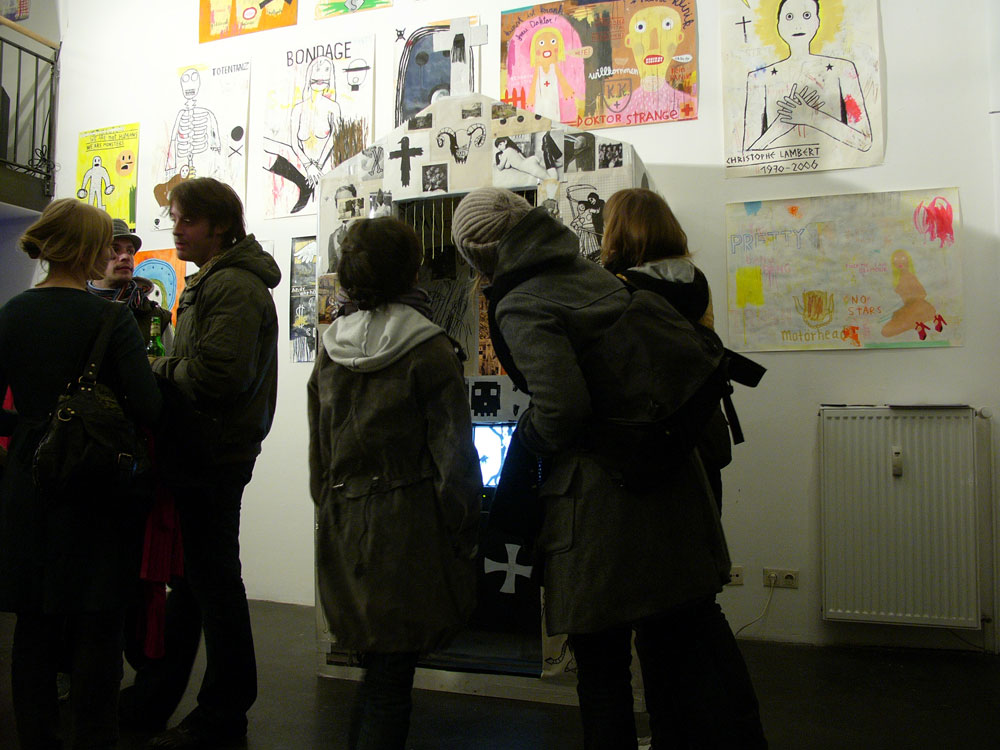 Even when observing the paintings and drawings carefully the visitors still find themselves speculating.Christophe’s style is inaccurate enough to leave some questions unanswered. While highly figurative, his paintings are still abstract in their message. Combinations of famous pop-culture icons like Hulk, Bambi or Batman, typography that ranges between childish handwriting and teenage rockband-lettering, explicit sexual illustrations in soft baby pink and pastel shaeds, portraits of Nietzsche and Goldilock, everything’s charged up with ready-made significances. The incoherent fragments only mix in the perception of each observer. 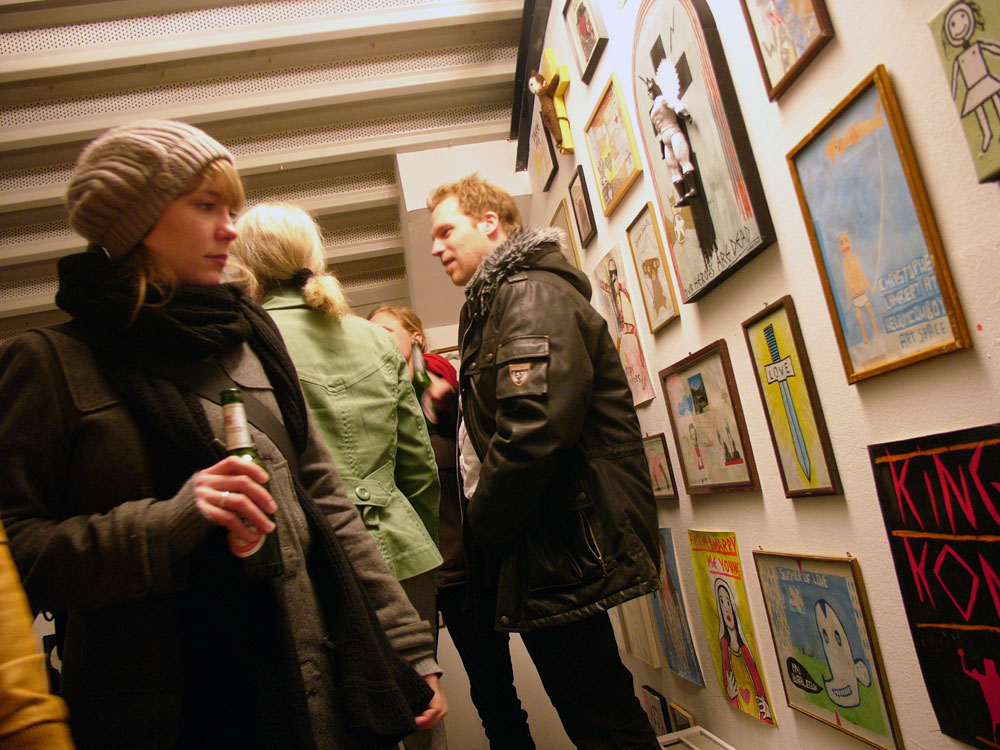 The reaction to the artwork this evening thus depends very much on the individual background of the visitors. While some find the pictures of bondaged women revolting, others still note the sensitivity of the presentation and mainly appreciate the humour and disrespect of the artwork. While some criticize the immature technique Christophe uses, others realize that this grubbiness adds to the abovementioned indetermination. Without this vagueness some subjects might appeal flat or brutal, but with the obvious imperfection all pictures inherit this reckless spontaneity that lets you turn a blind eye on the insolence of the subject.

Since Christophe’s universe contains all sorts of creatures, there‘s also a big chance for each art-lover to find his or her favourite piece. There’s artwork for lovers of ice-cream, feet, of Nietzsche, Barbarella and Goldorak, of knights and knickers, of butts, hearts and brains. Individual chaos for everyone!