The playing style piecing each guitar-riff in the loop is like a graphic drawn by each pixel. Because of the style, it is more enjoyable to see a set of his performance than to listen to only the sound. If you listen to the sound, you cannot imagine that it is played by only one person, but you’ll understand when you see his performance. His music is made by mixing the rhythms or timings of such as changing effector and setting the loop. Not only the guitar play, but he is also working as a designer doing web and graphic designs.

You can see his extraordinary design sense at “Cornelius x Merce Death x polo-Really x Google Map x YouTube“, which is a music clip that you can enjoy the world of Cornelius music by moving sounds by yourself.

I’ve interviewed him about his activities as Merce Death, and how his works as a designer are made. 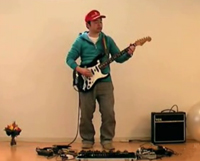 Please tell us about the name “Merce Death“.

Originally, I was trying to make a band with 2 friends of mine, and we were sort of talking about the band name. One said “how about using Mercedes and death?” and the name “Merce Death” was made. When I started doing “GIG” by myself, I used the name without thinking that much, and it has already passed 5 years now… My friend who made the name is still complaining about it.

The thing is, Merce Death is just exposing the solitary play using a guitar. So basically, one person is enough. Enjoying myself is the big idea. It’s a bit geeky doing something with heart and soul only by oneself, don’t you think? I have my favorite guitarist called “BOB LOG III” who wears a helmet with a phone handle, dynamically plays the bass drum and shouts with the high-speed blues guitar. While I want to ask him like “why are you doing all this by yourself??”, he actually really attracts me and is so cool. So does “Squarepusher”. “Lonesome Organist” is funny and cool too, playing about 5 instruments at the same time. I am the person who prefer the things with some funny elements than only cool things. And I guess that is a part of the reason I have chosen to do by myself, not in the form of band. Of course, I love the jam session as it has also another amusingness.

Speaking of the reality, it is much easier to book GIG performance by doing by myself, because I don’t have to check members’ schedule. So even when I’m busy, I can participate in the event as long as I keep the moment of GIG. This is an important point for me doing music and working for another job at the same time.

Who is the artist you have been influenced by?

As a guitarist, the masters in my heart are Mr. Jeff Beck and Mr. Jimi Hendrix. I listened to 70s’ music a lot. I liked various genre of music including funk, folk, blues, country, jazz… Especially 70’s Frank Zappa’s jazz rock was the one I used to really love, and I was playing the guitar to the music like “Hot Rats”. Then the middle of 90s, I saw Beck’s concert, and started thinking that the current music might be not that bad too. After that I was shocked by Tortoise’s “TNT” and felt like “cool music is still here now!”. I started listening to post rock and electronica after that, and now I also like stormy ones such as “Battles” and “Sleeping People”. Well, I guess my GIG is like all the above (laugh).

Is your guitar riff an improvisation?

Yes it is an improvisation. I am often asked if I don’t get nervous not deciding what I play beforehand, but to me, it’s rather distress to play fighting with the “anxiousness not knowing when I miss”. I would definitely miss the most important phrase (laugh). Of course I know from my experience that there is a feeling of accomplishment after finishing the play, but it’s more important that things even I haven’t expected come up one after another. I’m trying to do new things every time, such as in the way of connecting phrases. I feel really excited when I try new combination during the play and it unexpectedly goes really well. I enjoy myself rising my spirits with the buildup of those phrases.

A friend of mine, Mr.polo-Really who is a musician and a web designer, told me about the Cornelius’s remix & music video contest produced by a magazine called Sound and Record. When we started getting the idea, I found an interesting “structure”; the sound sources of Merce Death, polo-Really, and Cornelius are remixed by users, and the result is different every time while still remaining the world view of Cornelius. Soon I emailed the idea to polo-Really, and he replied with proposals “how about using Google Map?”. And the idea grew thick and fast, the form was soon completed. We both got really excited seeing the finished work.

As a result, we received “win off the charts” in the music video section of the contest, even if it was over the prescription. We were pleased and felt the possibilities by receiving such an evaluation for the relationship of “interactive” and “sound” as “music”, which could ever be only for a part of the web industry.

*It used to be titled “Re-mix 2.0” when it was launched in the later 2006. After the word 2.0 has been expended too much, what we meant is getting different, so we changed the title to “Cornelius x Merce Death x polo-Really x Google Map x YouTube”.