APMT (apartment) is an art & design conference hosted by creative portal website CBCNET. Every time they feature people who are active in the front lines of their fields, and they give us pleasant unique sessions. The past line-up includes Toshio Iwai who introduced his “TENORI-ON” for the first time, Takeshi Hamada, SEMITRANSPARENT DESIGN, overseas ni9e and WeWorkForThem. This is one of the leading design conference in Japan with the thrilling line-up. 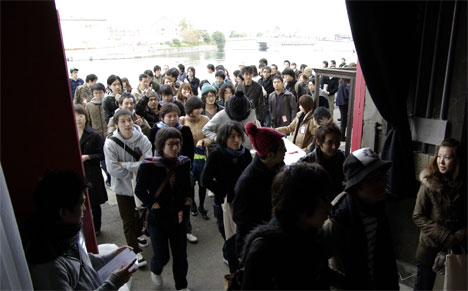 November 17th of this year, “APMT3 – What’s your color?” was held. Veterans with broad knowledge and skills of expressioin. Such as Mamoru Kano who is a chairperson of FUTURISMO ZUGAKOUSAKU, Hudson Powell from London, Exonemo whose territory is no longer on the web only, Dainippon Type Org. that plays with typography, Tomokazu Matsuyama who is in full activity in NYC. About 200 design/art freaks got together at BANKART1929 in Yokohama, they had a ball with a series of design talks in chilly sea wind. 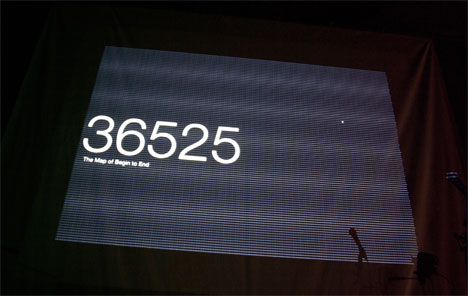 Mamoru Kano appears at first, who also belongs to a picture production group “WOW“. Each work series of screensaver, “The 20th Century Voyage” or “HOTEL GADGET“, keeps ticking away the perpetual minutes at random so that it makes us to realize a sort of once in a lifetime beauty. “What is a valuable work to me? It is something impressed itself on memory.” I seem to see the bare bones of Mr. Kano’s representation which is very witty and poetic. He says he is going to get down to client work consciously with artistic taste the hereafter. “There is always something embodied by because of corporative or because of individual.” I am glad to see a way he works back and forth with art between client and private that suggests me a creation in new era. 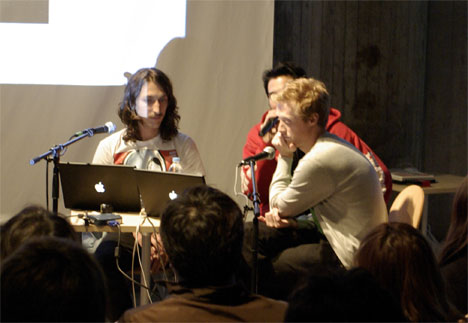 The second is Jody and Luke brothers a.k.a. Hudson Powell from London. With the variety of careers in typography and virtual reality, they have a wide range of work from graphic design to animation and interactive. For example, “Responsive Type” (Exhibit at SOSO, 2005) they displayed letters on different sizes of screen in most legible shape. Their design resonates media itself far beyond its territory. The session makes me feel great expectation that they manage to deal anything (in a light mood) to output as pick up an input. 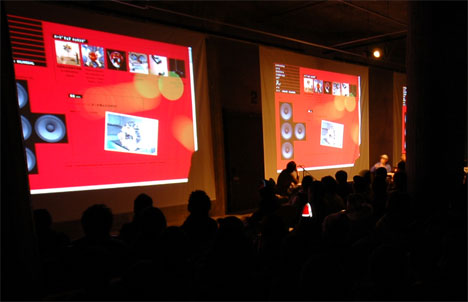 The event followed by Exonemo, expanding many experimental projects on the internet and installations throughout the world. He enjoys himself presenting with truly skillful tact and a handy camera even when he has an accident that a picture is not displayed on screen. His spicy expression is still alive (even more) as follows. A game installation where a character flits around at its discretion. His line between fun and weird is thin as a knife’s edge. “Danmatsu-Mouse” (Death Throe + Mouse) is that you enjoy a moment your mouse dies. We are entertained by his attitude toward interactive designing that he earnestly (but loose) digs into a fact “somebody is there” although he dares to carry the banner “The theory of web degeneration”. 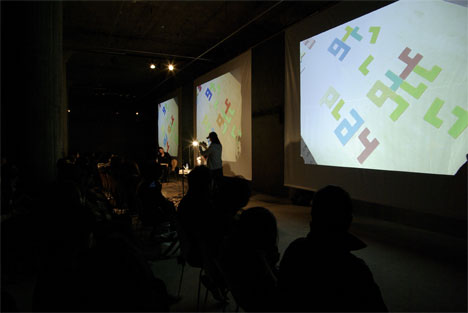 The forth entry is Dainippon Type Organization. They give an introduction from “KUROFUNE 20000” (a letter ‘A’ and its pronunciation ‘ei’ are made with same parts) to “FUN FUN” (with 6 letters of FUN FUN, you can make a Chinese character meaning fun! ) and a new typo game “PLAY” which is culled from “TOYPOGRAPHY” on sale by KOKUYO and was on exhibit at Design Tide. I felt their speculations on sort of fetishistic meaning and from. A bird could be any shape if someone accepts it as a bird just like there are various looks of Japanese cursive syllabary “A” or “NA” even they are same. This no-answer creation will be showing the secret of making in the shape of letter, that is to say the secret of conveying something. 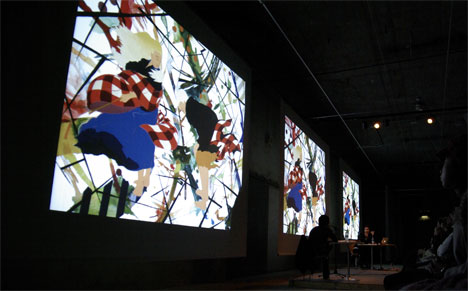 Tomokazu Matsuyama, his “MATZU-MTP” was reported in SHIFT before, comes on stage at last. He goes over to NY as a painter after his career in graphic design with his longing for “people who earn their livings by doing what they want to do”. He tells a story how to get back on track by selling an idea by himself. Then he gradually achieves a harmonious artwork with both street scene and his roots in Japan brilliantly. A Japanese traditional motif dyed by pop colors and patterns, his hybrid artwork takes on new value impressively. The bare truth of his progress transmits a message that inspires us an eagerness for creation. 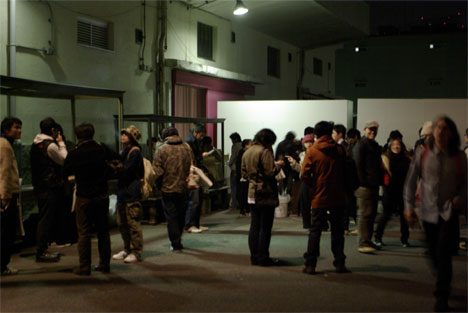 It is a motivation that provokes me into something every time I feel at APMT. The exact same feeling when I read an interview that vibrates my heart. This conference is a valuable occasion of receiving a live precious word. The theme is “What is your color?”, then what is my own color? The answer will lead us straight up to our next work.