Gerald Matt, Director, Kunsthalle Wien and seasoned Lomographer, kicked-off the 7th Lomographic World Congress in true LOMO-spirit by reciting his ‘95 Theses of Lomography’ in front of an ever-growing audience at Trafalgar Square. Some didn’t know what had hit them. 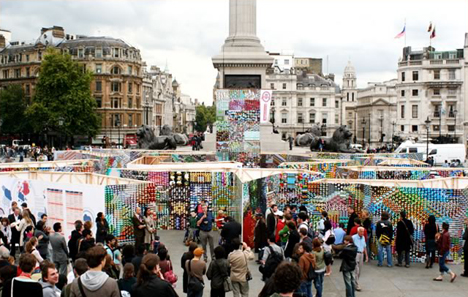 The largest, most expansive LOMOWALL is at this very second snaking its way around the famous London landmark. What began as a friendly invitation from the organisers of the London Design Festival, has grown into an invasion of 100,000 Lomographs from every corner of the globe brazenly displayed on more than 1,365 panels. It’s inspiring to see such a historic space filled with an enormous visual reflection of people living in this moment. And that’s what it’s all about! In the words of Amira Bibawy, Head of Communication and Project Development “The World is the centre of LOMO”.

LOMO-Fever is infectious! The curiosity the LOMOWALL provokes in everyone is incredible…. The city-tigers, the tourists, the old folks, the workers, the Old Bill, the punks, the lost, the lunch-breakers…all snatching a moment to lose themselves in a visual documentation of us, Here and Now. 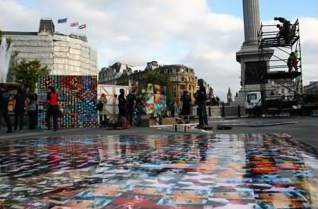 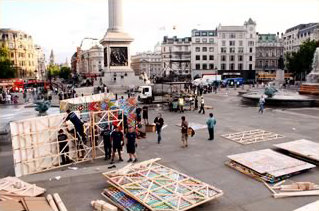 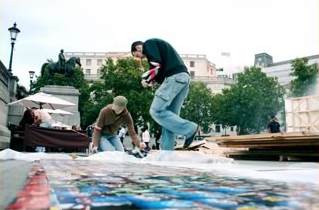 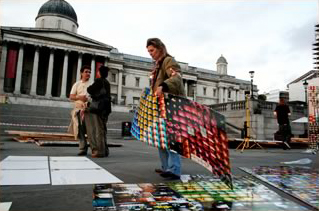 Everyone has played their part. Even the LOMOWALL lorry driver, who after heroically transporting it across Europe, refused to be moved by British transport police until the LOMO-Action Team arrived. The A-Team then raced to erect the mighty creature and the result is the biggest ever global snapshot. As you read there are LOMO enthusiasts like ‘milo-steelefox’ guarding the LOMOWALL from sticky-fingered LOMO-Bounty hunters!

Yes! The Gold Diana is the official World Congress 2007 camera. After taking a 30 year production vacation, Diana is back in the medium-format game. The Diana became an analogue legend for yielding ridiculously vivid images with this unique, otherworldly aesthetic.