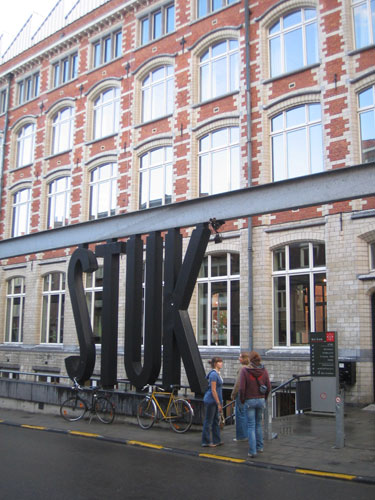 Out of 29 movies, shown at four locations in the city, we chose six that adapted best our interests and our private timetables. Regular ticket price was 5,5 euro. As we were going to watch six movies, each of us bought a reduction card for 24 euro, meaning we paid four euro per documentary.

All six movies were shown in Arts Center ‘Stuk’.

Jake Clenell (UK, 2006) ‘The Great Happiness Space’ explains everything about Japanese host clubs. It deals the most expensive one: Cafe Rakkyo. Issei, boss of the club, guides you through this world of young guys (with female looks) persuading girls to spend big money at Rakkyo. Girls can waste easily up to 5000 dollar a night, while having fun and drinking expensive champagne with their entertainers.

Daniel Gordon (UK, 2006) ‘Crossing The Line’ covers the story of James Dresnok. While serving for the US Army back in 1962 during the Korea War, Dresnok decided to defect and crossed the border with North Korea. Interviews with Dresnok guide you through five decades full of fascinating stories about a big American living among millions of North Koreans.

Basil Gelpke & Ray McCormack (SU, 2006) In ‘A Crude Awakening: The Oil Crach’ experts all over the world explain about nearby Peak Oil: many countries are producing less barrels of oil a day. The camera crew filmed places that once were the oil centers of the world – now they’re left behind and reserves are empty. What will be the consequences of a life without oil? Is there anything that can replace it?

Jeremy Hamers (BE, 2006) ‘A Verdade Do Gato’ showed us images of burning sugar cane fields. And that was about it. The movie lacked information about bio diesel in South America. The documentary was filmed in more or less four takes of fifteen minutes, in which nothing was said. Very, very boring.

Yves Cantraine (BE, 2006) ‘Het Rijksadministratief Centrum’ (Governmental Administrative Centre) tells the story about a big office block in the center of Brussels, which was once the utopia of centralist bureaucracy. Employees are interviewed and shots are taken in long, dark corridors, as it was filmed 20 years ago. This interesting documentary won the national competition at Docville.

Stijn Coninx (BE, 2007) ‘To Walk Again’ is a somewhat melodramatic documentary and portrait of Marc Herremans, who received a spinal cord injury during a training in 2002. Marc trained to win the Iron Man triathlon at that time. After he found out to be paralyzed from feet to breast, he decided to continue training. Last year, Marc won the Iron Man for physically disabled persons. He just can’t stop sporting and hopes he’ll some day be able to walk again.

Docville was a well organised, friendly film festival. However audience was scarse. While theatres could easily host 200 people, most of the movies we saw, only had 30 people present.