The most delicate concert which would be cancelled when wind blows, was really quiet. Or rather, had to be quiet. Right before the concert started, staffs with a “Be quiet please” board were running around the venue, and the notice was announced in broader area. Around the stage with the special microphones which “even captures the rustle when you put off your gloves”, people were restricted just as well on using mobiles as on moving for 40 minutes of the concert time. The audience with basted breath prepared for the sound of ice, which would be played for the first time in Japan. 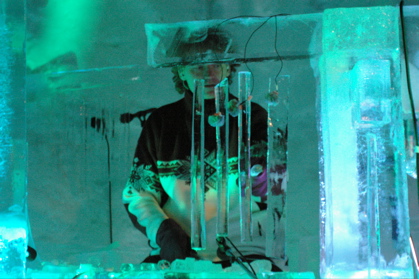 The concert started with the deep and lowly beats from Terje’s feet. Arve’s high note voice and ice trumpet responded to it, and they created fantastic 40 minutes in collaboration with beautiful lighting on the clear stage and the audience as participants. 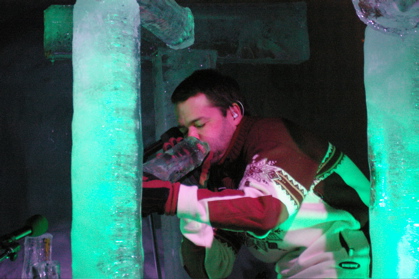 At the beginning, I focused on Terje’s percussion technique, but the performance itself was very simple, which was good. It naturally rode on the strength of the whole atmosphere and various kinds of delicate sounds of ice. Unexpected deep sound of ice drum was impressive. 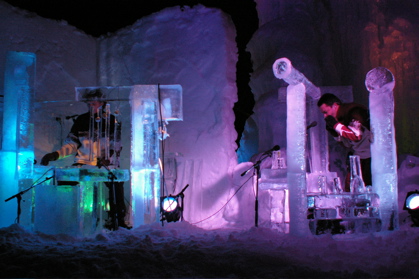 All the musical instruments from the trumpet to the bass drum were made by ice except mouthpiece. It is said they do the concert at temperature below minus 30 degrees C in Norway, and the lower temperature it is, the better sound can be made. In the Shikotsu’s winter of this year which might be too warm for them, though only the concert was made which can be only actualized under this condition of this moment.

“This performance is not to show, but to create together with the audience and environment.” I think this is the thing to be said for all moments of all live performances, but this was the concert most quietly emphasizing it with the delicate sound the winter’s nature produced.