Were we really going to spend this beautiful spring-afternoon behind the 3 metre-thick concrete walls of the bunker? But, I have to admit, I really like this surreal building plus there was going to be a concert featuring Bach and Reich which sounded like a nice concept to me, so here we were.

The venue was quite surprising. A light, plain room with wooden floor and a stylish tea kitchen, the windows presenting a wonderful view over the St. Pauli soccer-stadium, the current funfair on Heiligengeisfeld and the cranes in distant harbour. The bouncy outside world seemed far away, no sound reaching inside this tiny concert hall. 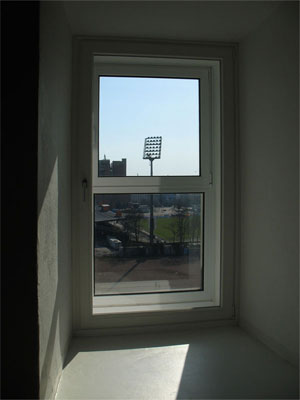 The first piece of music we were listening to was part of a composition by Michael Petermann called “Die Bachmaschine”. He also called it the “Well-Generated Clavier” (Das Wohlgenerierte Clavier) following Bach’s Well-Tempered Clavier (Das Wohltemperierte Clavier). The name of the composition derives from the fact that Peterman recorded every single of the 4000 pipes of the famous Arp-Schnitger-organ in St.-Jakobi Church in Hamburg, then composed some variation about Bach’s piece and mixed it back and forth.

The incredible spectrum of the organ and the unnatural perfection gave me goose pimples and it seemed really absurd hearing such a bombastic sound coming out of a tiny loud speaker. 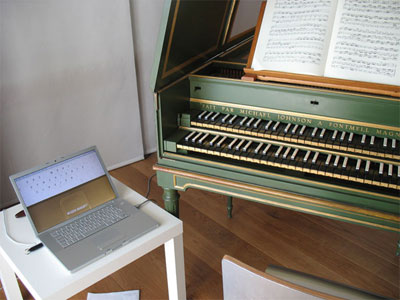 The whole set was an interesting lecture about the creativity of copying, reproducing and sampling: The recorded pipes reaching back to 1500, their sound having been copied into a computer‘s memory, now being reproduced via sound system, playing Bach’s composition from 1722 but in the new version by Michael Petermann, who joined in with the “real” harpsichord, itself being a copy from a much older instrument. – Wow! 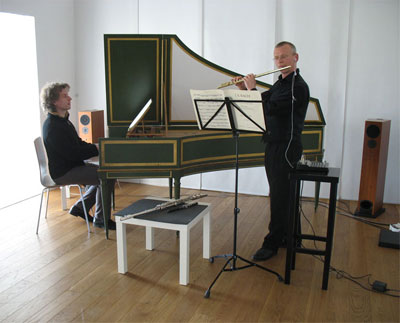 The “Sonate in h-moll” for flute and obbligato harpsichord (which means that the right hand was playing an independent part) alternated with Steve Reich’s “Vermont-Counterpoint” played by the flute and the “Electric Counterpoint” played by the harpsichord, both accompanied by the reproduced harpsichord sound coming out of the speakers. This confrontation of Bach’s and Reich’s music showed striking resemblance between the latter, both having straight, monotounous parts and parts where the phasing produced swing sound.