The sixth edition of the OFFF festival is about to open the doors. This year the small market “el Mercadillo” is set up outside next to the bar making the patio accessible to everybody and not only to the OFFF visitors.

Once again, the festival takes place at the CCCB, the Center of Modern Culture of Barcelona which shares a big backyard together with the MACBA, the Barcelona Museum of Contemporary Art. 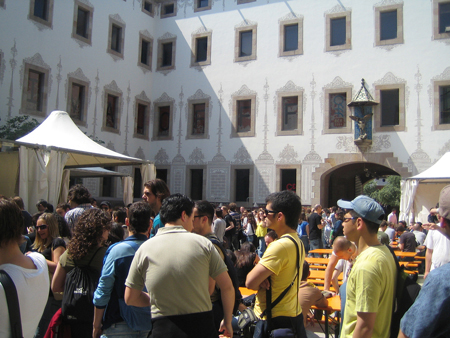 The festival is divided into 6 different spaces: The mentioned “Mercadillo” located outside, the exhibition space (“Showplace”) in one of the buildings, the “Roots” (conference hall), the “Open Room” (a space showing the work of new talents), the “Loopita” (dedicated to experimental electronic music) and the “Cinexin” (a projection room) located at the main building.

The opening ceremony is supposed to begin at 12:00 am and the doors finally open 20 minutes before. Unfortunately, the organization is having some technical problems with the projectors in the main conference hall, but everything gets finally fixed with some delay. 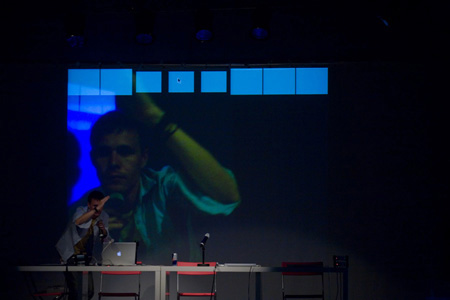 The user as the Interface, Craig Swann. © Borja Delgado

The festival is opened by Craig Swann with a conference called “Interactive Imagination”. Craig shows his looplabs project, an easy-to-use audio mixer implemented for the PSP.

Craig also shows alternative ways of interaction based on visual responses to motion capture. He explains how the users themselves can be used as an interface, and how “close” we actually are to futuristic Hollywood productions such as “Minority Report” just by using a webcam within a Flash application.

Some of his other interface experiments are based on very rudimentary hand-made peripherals such as iLock or Etherwatch, where the interface is created by the users’ finger tracks. Craig concludes his speech showing a generative audio CD, a never-ending, unique piece. No matter how many times you play it, the sound will always be different and infinite. Craig also tells us about his philosophy of keeping it small and his belief in independent studios where people are able to create more personal work than in big agencies. 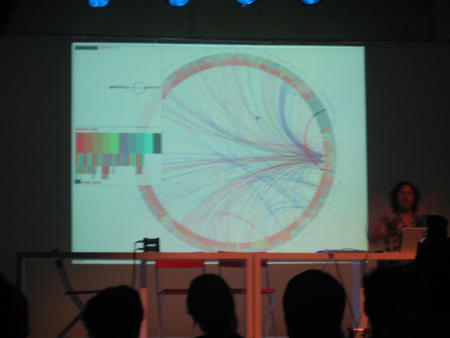 The next speaker is Santiago Ortiz, who talks about bio-digital art and the analogy of “the three codes”.

With his background in maths, music and literature, most of Santiago’s work moves between research and education and is primarily focused on artificial life and biological data visualization experiments.Santiago talks about a world where programming, genetical and linguistic codes coexist and are related to each other in different ways.With a simple example of virtual cells reproducing themselves by duplication, Santiago illustrates an example of the evolution of a species where, due to OO programming, the programming code is actually duplicated (and can be mutated) every time a cell reproduces by duplication, exactly as it happens with real microorganisms and their genetic codes. In a similar way, he shows a more complex system where each cell contains some linguistic code: a sentence which is grammatically correct. In this case, any cell can grow by acquiring another cell which contains a sentence that can be part of the sentence of the first cell. While the acquired cells obviously die, the other cells grow and tend to contain more and more complex sentences (linguistic code) each time.

Santiago also shows a project based on the genome visualization; a project which was exhibited in a medical congress although it was actually developed as an artistic piece.We should also mention one of his educational projects, “From microcosms to Gaia”, an exploration of the history of the universe, which is divided into different interface and navigational experiments. As the complexity resides in the timeline Santiago explores the ability of showing very different time scales within the same interface.