Scott Hutchison has been (for the last few years) blurring the genre between painting and video. For this exhibition he contributes three pieces. 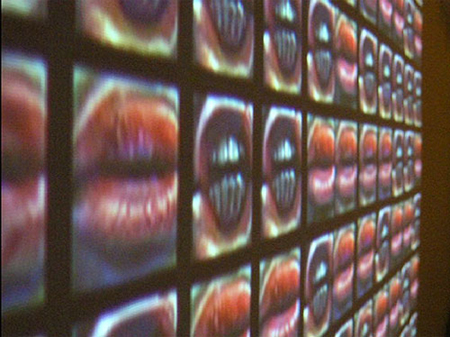 In “Chatter,” Hutchison projects onto a gallery wall a video comprised of a series of small paintings of his mouth, in different states of speech. “I don’t know,” it says silently to lip readers. A second work by Hutchison records on video the birth, development and eventual destruction, frame by frame, of a charcoal portrait of the artist; next to the video, the final piece hangs silently: a drawing of the crumpled up paper, and the paper itself. 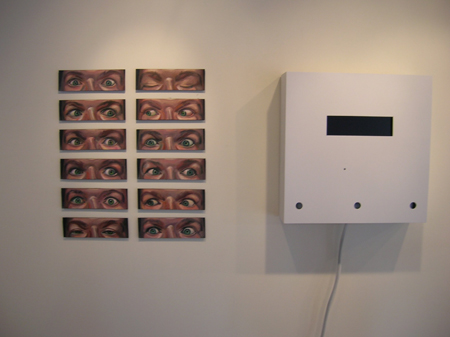 Together with fellow artist Thomas Edwards, Hutchison also contributes twelve paintings of various states of his eyes. The oils, done in an exceptionally realistic way, stand next to a pristine video box, where (from a slit cut into the box) the eyes follow you as you walk in front of them. And they actually do follow the person in front of them, as Edwards has videotaped all twelve oils, and programmed them with three motion detectors so that at all times Hutchison’s eyes follow the viewers. And every once in a while, his voice whispers to you. 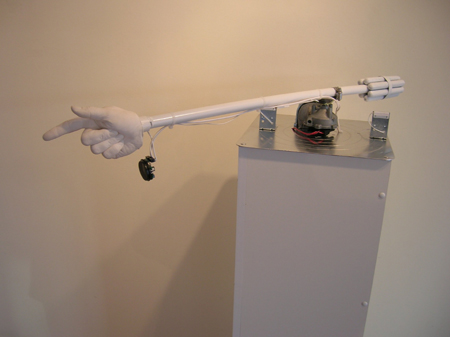 “I blame you for a lack of Tsunami warning systems,” shouts Edward’s accusing voice as the ghostly white hand, guided by a motion detection system, swing over and points an accusing finger at the viewer. It is one of dozens of accusations by Edward’s “Blame,” relentless in its pursuit of whoever walks near it.