“I blame you for low rise jeans,” accuses the voice of artist Thomas Edwards, emanating from small speakers below his moving sculpture of a white hand pointing an accusing finger. “I don’t think I know what I’m looking at,” whispers the set of video eyes next to Edward’s accusing sculpture. It’s the voice of painter Scott Hutchison, and those are his painted video eyes following you around the gallery space. 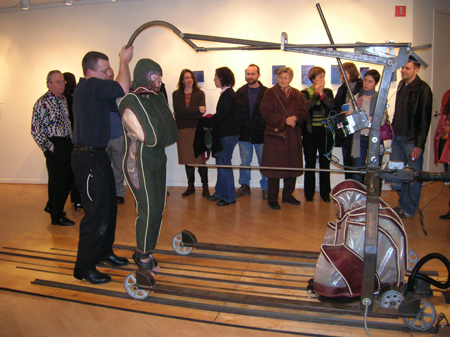 “Interface: Art & Technology” opened at the Fraser Gallery of Bethesda, Maryland on February 13, 2006 to a large opening night crowd of art aficionados attracted by the focus of the exhibition, which married a diverse set of artists who incorporate and use technology in their artwork.

On opening night the crowd was treated to a mesmerizing performance by Baltimore-based artist David Page, whose massive machine dominates the center of the gallery space. Page, who two years ago won the inaugural Trawick Art Prize, built it a year ago; the machine is titled “Hopscotch.” 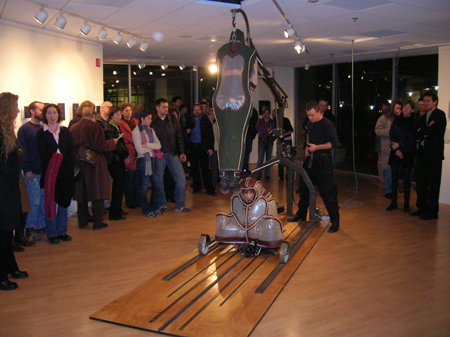 The Washington City Paper’s John Metcalfe described what happened: “Those inside Bethesda’s Fraser Gallery for the “Interface” opening on Friday night find themselves in uncomfortable proximity to a giant, shifting metal contraption that drowns out conversation with its engine drone. Half meat-packing machine and half go-cart disaster, the steel monster propels two straitjacketed humans, one hanging from a hook and the other strapped onto a rolling buggy.

A lithe, black-clad fellow flits about the apparatus with a stopwatch in his hand. He’s David Page, the 43-year-old Corcoran College of Art & Design teacher who designed the machine, titled Hopscotch. Page spent five days programming it to send its human cargo on a crash course. At the last moment, it will lift the suspended person over the buggy-riding person. Then it will repeat the process in reverse and switch itself off.”