Public art that’s engaging, thought provoking, and socially energizing is, unfortunately, rare. Often cities contract big name artists for public art projects resulting in self important works out of touch with the society it intends to benefit. San Francisco has seen a string of missed opportunities such as Oldenburg’s “Cupid’s Span” and the “San Francisco Hearts” project – both lacking any substance beyond the pretty facade, IMO. 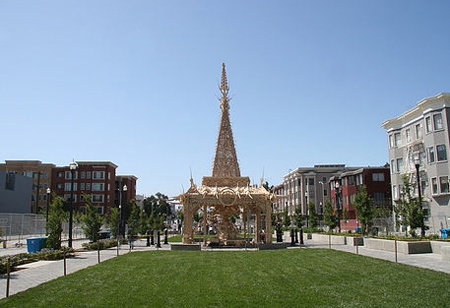 In an alternate reality know as Burning Man, social-based interactive art installations are a dime a dozen – the desert is practically littered with them. The Burning Man Organization recognized the power of the installations as social hubs and moved to form an arts foundation, Black Rock Arts Foundation, to support art outside their desert events. The BRAF’s primary goal is to sponsor interactive art projects that generate social participation and inspire the community at large. 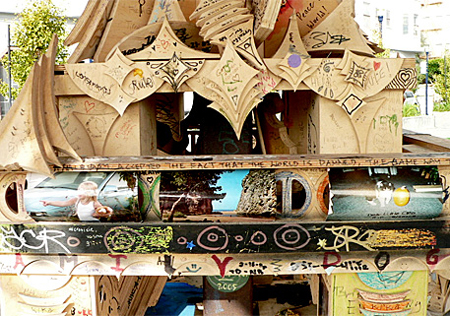 The first major BRAF project of this past year was by one of Burning Man’s most well known artists, David Best. At past Burning Man events he’s built massive cathedral-like structures from wooden toy scraps. These spaces became the central hub for a majority of attendees. Last summer he built a temporary Wooden Temple at a small park in the middle of San Francisco – a miniature of his famous desert structures. During the 6 months of structure’s life the space became a social magnet for all walks of life. The space was designed to encourage graffiti and design modification. As a result the space would change daily and provide new sights at every visit. Day or night one could find groups of people under the structure talking about social affects of its presence. 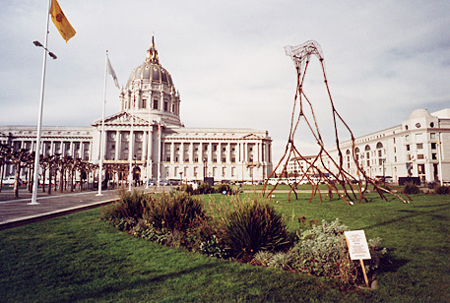 At the Burning Man festival, Michael Christian’s 30 foot tall sculpture “Flock” felt like a massive entity towering over the wide-open expanse. To see the sculpture against the City Hall building brought the two worlds colliding, with the scale of the surrounding federal buildings dwarfing once mighty object. The underlying theme of this project was to force a relationship between the surreal life of Burning Man and hyper real life of our government – an incessant tension.

BRAF is branching out beyond San Francisco with projects underway in New York and Arizona. The deadline for new proposals is March 31st, so get busy!