“Burn Baby Burn” collects a wide selection of the works realised by the Belgian born, American artist Jean Toche as a response and as a political commentary to the current US administration. All the prints presented at Artandgallery were originally postcards that Toche prepared using digitally manipulated photographic self-portraits, quotes from newspaper, TV footage and personal observations. The artist, from his house in Staten Island NYC, sends fifty copies of the postcards on a daily basis to a selected mailing list that includes artists, journalists and other public figures. 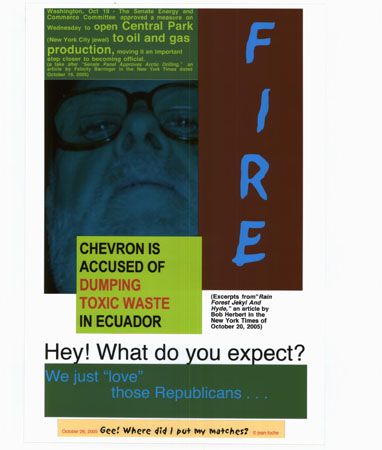 Jean Toche has been active since the seventies, when he founded the Guerrilla Action Art Group (GAAG) with Jon Hendricks and Poppy Johnson. In March 1974, the FBI has arrested him for posting some of his works that violently critiqued polices in American museums and as a consequence of the imprisonment, over three hundred artists subscribed a petition for his liberation. Jail was not the only problem he encountered: after putting bugs on the dining table during a social event organized at the Metropolitan Museum he has underwent psychiatric control, only to be found completely sane by the doctors.

The works displayed in “Burn Baby Burn” offer a glimpse of the process in which the single-minded political motivations of the artist become a serial, compulsive communication with the external world. Jean Toche’s choice of using only images of himself as a visual vector for his incendiary critic addresses at the politics of contemporary America and the balance between repetition and slight variations on the theme make walking through this show a charming experience.