Mike Mills is a graphic designer who has been taking active part in the graphic and film scene since the 90s, working also for x-girl, CD jacket designing, and so on. His design project since 2004 “HUMANS BY MIKE MILLS” finally arrived at Sapporo SOSO after the collection stopped in Zurich, Milan, Tokyo, and many other cities in the world. It was a quite happy month to enjoy his works for his fans of course, and even for those who don’t know Mike Mills well. 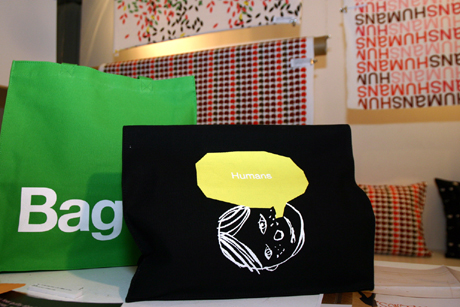 I mean by “those who don’t know him” that his works were even attracted people who happened to pass by chance. Because I guided a woman who said, “I’ve been watching because the color was somehow beautiful”. As for me, reading a material, I found an album “Butter08” I had been charmed by the graphic of its jacket, and that Mike Mills participated in it as a bassist. It seems I have been falling in love with the charm of his work from almost ten years ago. 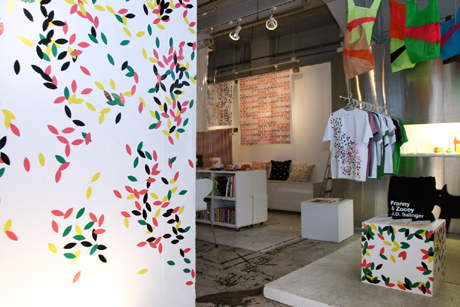 This first collection in 2006 was formed mainly by works from “HUMANS 02”. The style and the content of the exhibition were left to each shop, and SOSO had “mark’s paper ribbons” at the door and the graphic from the textile “elm leaf” on the wall as an original. I happened to notice a bag with the logo “Franny and Zooey” which was the title of an actual book by Salinger. What is this? It was an introduction to make us have a presentiment that seemed not just to be an exhibition of his works. 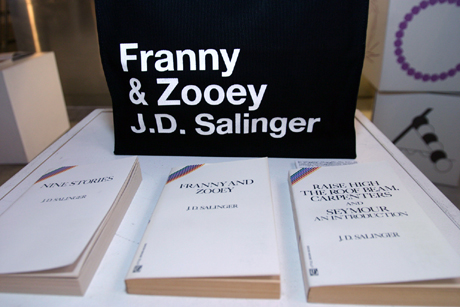 This exhibition had not only works produced by Mike Mills. There were also music and films from his favorite artists, a notebook to write down ideas, and so on. You can see the “Source of Mike Mills” and get these items if you want to use or know about it more. 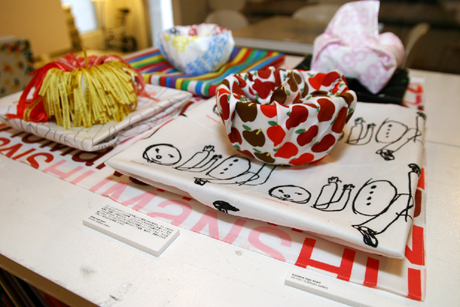 At the same table, there was a display with a bowl and plate used in the cafe. A unique proposal was performed covering tableware with a colorful scarf, cloth, and ribbon.