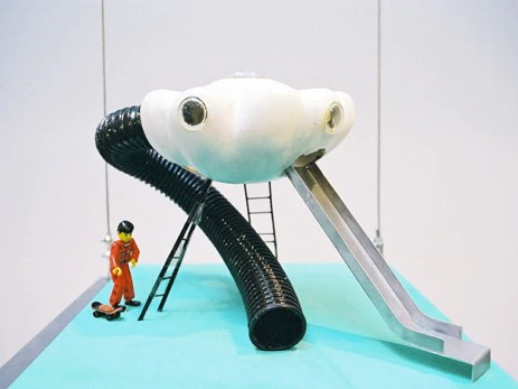 Playground & Toys is conceived as an itinerant exhibition (It has been hosted, among other cities, in London, Paris and New York) in which contemporary artists, architects and designers give their interpretation of children’s leisure time. But it also has the second function of promoting the edification of real playgrounds: after every local stage of the show, a jury composed by adults and kids select one or more projects to be realised in different areas of the world. So far, new spaces have been built in India, Armenia, Nigeria as well as in poor zones of Greece and England. 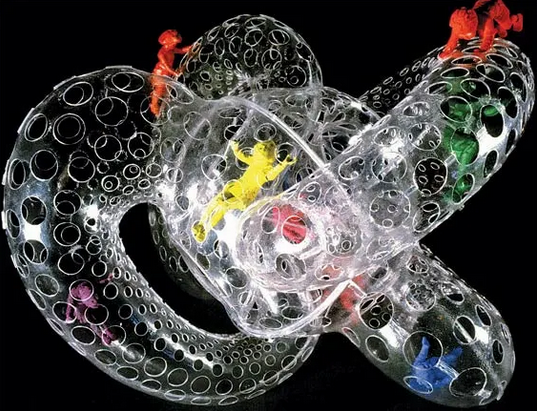 When the show comes to a new city, local artists are invited to propose their playgrounds. In Milan, seven new models have been added to all of the other travelling projects, now more than forty. Some of them are very interesting: Pietro Roccasalva has designed a gigantic egg “Countdown” (2005), whose surface has the looks of a canvas, in which kids are free to express their creativity by painting it from the inside. Also Alberto Biagetti fascinates with his rotating, colourful structure activated by the movements of the players themselves, “Flying Mandala” (2005).

Two of the most outstanding and poetic playgrounds, realised by Enzo Mari and Charlemagne Palestine, come from very different esthetical backgrounds. The Italian designer produced the simple and neat “The Big Stone Game” (1968) inspired by his infancy spent in a very poor rural town where just a few reference points were sufficient to transform a square into the setting for different games. The American composer and artist, on the other hand, created a dreamy garden filled with different kind of animals and dominated by the figure of big teddy bears holding the globe.