Palast der Republik – the building was decided to be destroyed by the former Federal Republic of Germany (Eastern Germany) Congress in 1990. Because asbestos had been used for the building, they publicly gave the reason that “it would be harmful for human’s health”. However, considering the fact that there are some other buildings in Berlin that contains lots of asbestos, political reasons that hates remains of former Eastern Germany era is more persuasive. 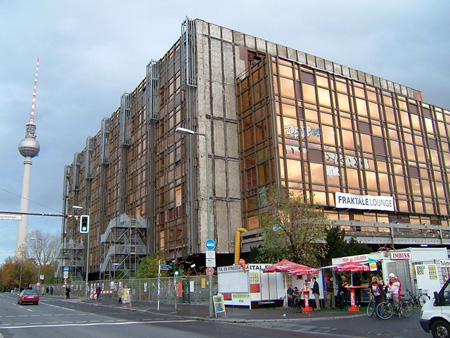 There was Berliner Schloss constructed by Friedlich II where Palast der Republik was built. After suffering big damage during World War II., Berliner Schloss had labeled as “a symbol of Germany that has a past of the feudal age and imperialistic” by Eastern Germany authorities concerned, and got destroyed. After that, in 1976, under a plan by Heinz Graffunder, Palast der Republik had constructed. In the palace, a national assembly was used to be held. Moreover, not only political uses such as a meeting place of SED (Sozialistische Einheitspartei Deutschlands) and FED (Freie Deutsche Jugend), the palace carried out concert, exhibitions, and plays, and fulfilled the functions of an entertainment facility for people by establishing restaurants, bars, and dance spaces as an annex. 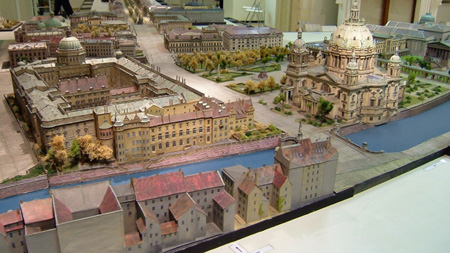 Inside the building, there is a work by (e.) Twin Gabriel above the stairs which used to shine all around. This work is a part of introduction of this exhibition.