This month’s SHIFT cover is designed by Akinori Oishi. He has expanded his activity in Europe since he got the award of the New Talent Competition at the International Multi Media Trade Fair in France, Milia 2001. He is a graphic artist and specialized in an interactive animation. His work was exhibited at DOTMOV Festival 2005 as a special guest exhibition. He creates many graphic works, filled up with small graphics, which express his own universe as well. These his graphics will be seen in SHIFT 2006 calendar.

Tell us about yourself.

After studied media design at IAMAS, I got the award of the New Talent Competition at the International Multi Media Fair in France, Milia 2001, with “Micro-Plantation” which I created while I was at IAMAS and this led me to go to France. I belonged to a creative design team in France, TEAMCHMAN for 3 years and most of that time I worked in Europe. Currently, I teach at an art university ECAL (Ecale cantenale d’art de Lausanne) in Switzerland as a part-time instructor and also I teach at a art university in Japan, so I make lots of round trips between Japan and Europe.

What brought you to become a graphic artist?

At first, it was my dream to become a comic artist of art comics and my work was published in the monthly comic magazine, Garo. My comics of those days were like cutoff animation which could be an original of cartoons. While I was drawing art comics, I felt like Japanese comics were too much commercialized and how small their perspective was. I forwarded to Europe where the art comic was well established to take a workshop class of the animation production at an art school there. I was very amazed at possibilities of computers in that class. After I came back in Japan, I studied digital media design at IAMAS and I started to create graphic arts and animation based on monochrome drawings, and eventually to create interactive works, too. 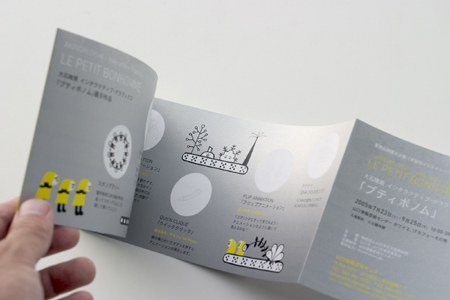 Tell us about your activities in the design team, TEAMCHMAN in France and at the art university, ECAL in Switzerland. What made you go to Europe and work there?

In the design team TEAMCHAMN, I worked on creating projects along the theme of “integration of art and game” with team members who were very well-skilled programmers and sound designer, and also worked on other producing TV commercials etc. As a part-time instructor at ECAL in Switzerland, I’m a teacher of MID (media & interaction design) courses. Since Swiss design is way advanced, it always gives me a lot impulse. I started to work in Europe because I got to know people in TEAMCHAMN at a festival I was invited. It just happened to me through my network with them. To be a friend with members, I visited their office and studio several times, and I just found myself working with them. 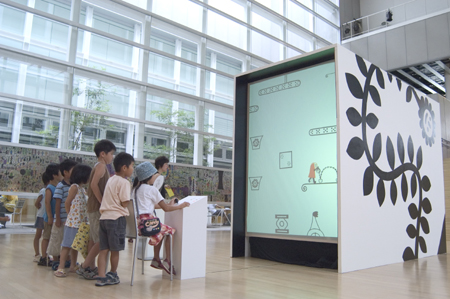 Compared to Japan, Europe has a larger demand share to the art. Opportunities to see arts are not only in exhibitions, they are almost everywhere. People in Europe are knowledgeable about the art in some way. I like working in Europe because they admit even a tiny thing and this is very attractive part to me about the European art. Other characteristics of the European art are art events and festivals are held very often and that there are also many opportunities for artists’ activities. While there are many places to show own art works, the commercial art entertainment has not developed greatly. Since it doesn’t have an industrial base for this kind of entertainment unlike Japan, many of Japanese comics, game software, and even contents of TV programs are imported to Europe. People in the European art industry are longing for such Japanese society which lets the entertainment grow so successfully. However, it’s strange for me to see the Japanese entertainment is introduced in Europe as the art. 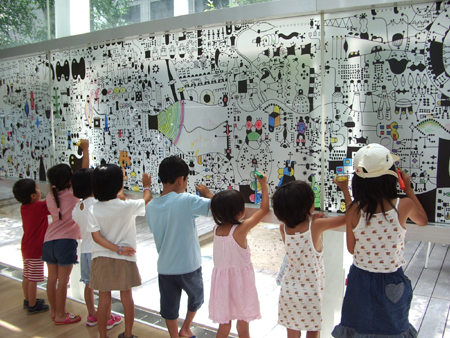 Tell us about “Le Petit Bonhomme Exhibition” held in this summer.

“Le Petit Bonhomme” was held at YCAM (Yamaguchi Center for Arts and Media). It was exhibitions of compiled works from my IAMAS’s works, activities in France, to current activities – games displayed on a big screen which can be played, separately colored wall paper which is creating a cityscape, and one-bottom game of simple animations with a few cartoon strips. A stamp stand was set up in places and visitors could enjoy exploring the graphical miniature universe of a little characters, Le Petit Bonhomme who appeared everywhere at the exhibition endlessly.