Action considered: For “Lithuania without the quotation-marks” (campaign to protect the cinema), “We will not calm down without Vilnius” (campaign against Benetton that superseded Vilnius cinema), “Return of the repressed: pioneers against the former communists” (campaign reclaiming back the Pioneer Palace). 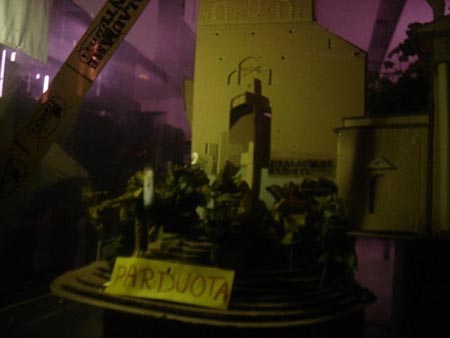 Pro-test lab squated the pavilion of the cinema Lietuva to run the function of the recording device that becomes the brain work of the action, generating and registering scenario of the protest.The space of the lab mapped and unfolded several areas of access.

Lietuva TV peoples television: to record and broadcast citizens voice with lots of different independent films. Modeling Zone was a creativity and work area for architects and/or anyone willing to model situations. Here signs/building models were produced for a game show “VIP Market” by ASK – Architecture Students Club. Reading Room was created to archive and navigate the protest scenario. AViZa Kitchen was a nice place to cook the discussions and discuss the secrets of making! Green Stage area for DJs and VJs, poetry or voice amateurs and professionals, podium for conversation or action, as needed. And Wished Zone to exercise the desires and to desire the exercises. 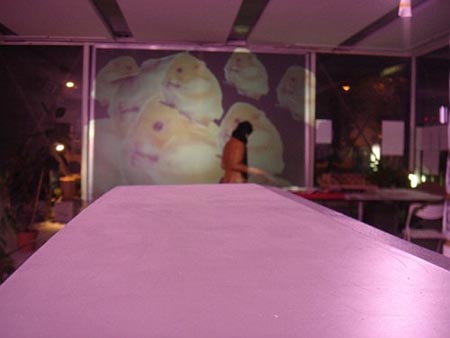 Carneval in Lietuva was the last party in the lab with INTERMEDIA/KIT students and Rut Rut collective, which presented sound and visual session with telebridge to England’s artists. “Dog Voice Is Not Going To Heaven” was the title of the last protest of the pro-test lab. Vilnius citizens were invited to come with their dogs and with the help of their barking protest for Lietuva closing. An ironic event attracted lots of people expressing their love to this old cinema theather.

After that funeral candles were lighted and some symbolic corsses were build near Lietuva. The event ended with two symbolic films – “Idiots” by Lars von Trier and “One Flew Over The Cuckoo’s Nest” by Milos Forman.