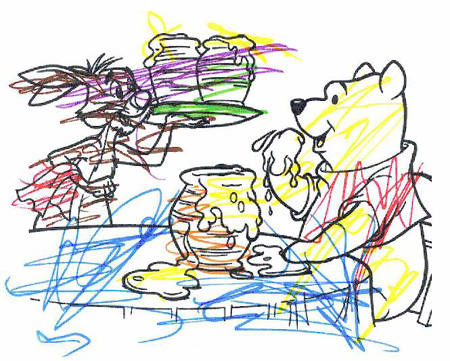 Do you have children aged between 0 and, say, 10? Are they into ‘traditional’, i.e. offline, games? Do they still draw on paper and read books or do they prefer to play with their electronic toys and interactive devices? For those among you who might not have been told yet: even old friends like Winnie the Pooh have re-entered the toy scene as interactive dolls that read stories using the names or favourite food of your kids… Do you know, by the way, how much time your children spend playing video games, watching TV or ‘moodling’ each day?

No doubt, the advent of Internet-enabled personal computers, mobile devices and, more recently, interactive toys has added a new layer of communication and social networking possibilities to the life of our children. As has been shown by a study realised by the Henry J. Kaiser Family Foundation, ‘even the very youngest children (in America) are growing up immersed in media, spending hours a day watching TV and videos, using computers and playing video games.’ While previous generations were introduced to media through print, the younger generations’ pathway is electronic. As the study suggests, ‘nearly half (48%) of children aged six and under have used a computer (31% of 0-3 year-olds and 70% of 4-6 year-olds). Just under a third (30%) have played video games (14% of 0-3 year-olds and 50% of 4-6 year-olds). Forty-three percent of those under two watch TV every day, and 26% have a TV in their bedroom.’

In the educational sector, the new media have held out the promise of more engaged, child-centred learning opportunities. Whereas common sense suggests that the exposure to digital media affects young people in formative ways, which may be reflected in their judgment, their sense of self, how they express their independence and creativity, and in their ability to think systematically, there is still little empirical evidence to back this up (*). Anyway, it is a fact that the new interactive digital media have become an integral part of our children’s (learning) lives.

Accordingly, it is suggested that technology may in fact be revolutionising the way that young people think, learn, and experience education. A trend we must follow? ‘Yes’, the organisers of the international media congress on “Children and digital media“, to be held on 24 and 25 November in Vienna, Austria, are convinced. The congress aims to unite an international community of scholars, researchers, educators, policy-makers, and industry professionals whose goal is to improve the media environment in which children live and learn. Their objective will be to think about the implications of children’s innovative digital cultures for schools and higher education, and engage in a dialogue with educational planners in the European Union. The ultimate goal will be to provide for a better integration of digital media into the field of education. Young users should benefit from the manifold opportunities offered by the new media rather than be affected by their disadvantages. In fact, although computers are now fixtures in most schools and many homes, there is a growing recognition that kids’ passion for digital media has been ignited more by peer group sociability and play than academic learning. Accordingly, the aim of this two-day congress will be to discuss the chances and risks involved, as well as to find proper strategies for a beneficial use and application of new media in the field of education. As it will definitely be impossible to fully “control” all sources of information in the digital world the goal must be to close the gap between in-school and out-of-school experience with digital media in order to foster the learning process. Perhaps organisers and participants should see this as an opportunity to re-energise public education?

*In May, the Chicago-based MacArthur Foundation awarded $3.8 Million in grants to explore how young people use digital media and its potential for improving learning.