Since its opening in 2002, the Palais de Tokyo has quickly established itself at the forefront of contemporary culture, and is now considered as “the place to be” for all the art-lovers and the fashion junkies.

This summer, the Palais de Tokyo has invited the talented graphic designers M/M – Michael Amzalag and Mathias Augustyniak – to create a display / scenography with the collection of the Greek Dakis Joannou. 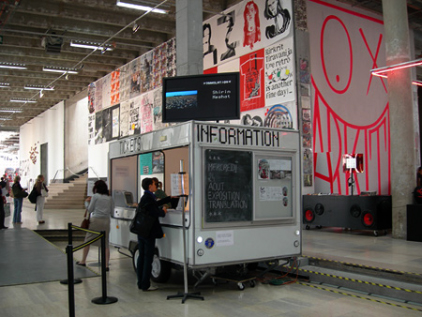 And the casting of this blockbuster is simply amazing: Vanessa Beecroft, Maurizio Cattelan, Mike Kelley, Takashi Murakami, Joseph Kosuth… In a word, the best products of our contemporary culture, in one of the most atypical art center of the world.

The result is a veritable visual opera in the industrial-size space of the Palais de Tokyo, with artworks melting and jumping on each others, a chaotic but really enjoyable journey into the universe of M/M. 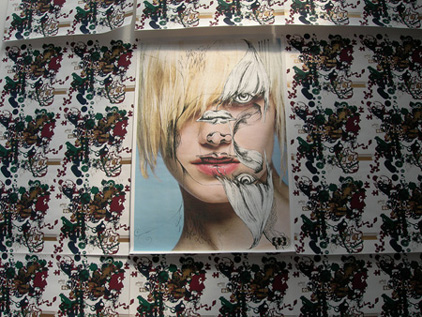 The strategy of M/M to invade the Palais de Tokyo? Superimposing sculptures over paintings, artworks over posters, and vice-versa, to create unusual formal connections or bring together objects that otherwise shouldn’t have met each other. So finally, Translation can be considered as a big installation of M/M as well as a group show where their own work is also represented. Moreover, it’s interesting to notice that the posters of M/M are sometimes better than the artworks themselves. They are often more powerful and intriguing… 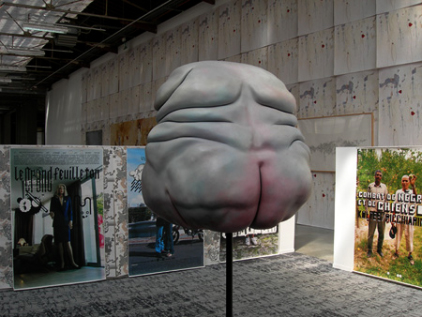 Anyway, some pieces are strong enough to get out of the scrum: one of them is the Inoshi (2004) project of Takashi Murakami. Inochi is Murakami’s newest creature, an alien boy sculpture that stands about 5 feet, accompanied by short videos of him in various scenes in a Japanese classroom. The video about Inochi’s milk allergy is pretty funny. But the kawai aspect of Murakami’s work is, as always, confronted to the commercial aspect of it. Murakami conceived this project as if it were a car or any other high end leisure product. He worked with the highest profile commercial filmmaking company in Tokyo on all aspects of the project including script, casting, sound, look and concept of the project. It became one of the most ambitious animated film in the contemporary fine art world.