The Optronica festival marked something of a breakthrough for audio visual art in the UK, being the first event to showcase such a wide range of international VJs, electronic musicians and video artists in a setting at the heart of mainstream culture – the South Bank. The lively riverside area is home to the National Film Theatre and IMAX – Britain’s largest cinema screen – both run by the British Film Institute, which hosted the event in collaboration with multi-media artists and producers Addictive TV and curators Cinefeel. 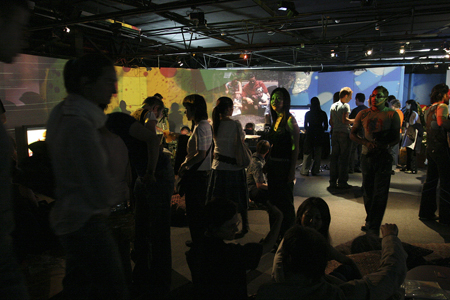 The festival kicks off on Wednesday night in the packed IMAX, when AV performers The Mellowtrons blast us into space for a playful mix of science fiction and 1960s TV samples, interspersed with more serious meditations on the state of planet Earth. The atmosphere darkens with the world premiere of Greedy Baby by Plaid and video artist Bob Jaroc. The imagery moves from menacing urban landscapes to a cartoon vision of Mexico’s streets, where comic hero Super Bario Man fights for the poor. I’m close enough to feel immersed in the screen, and the thundering techno beats and bright, flashing, abstract sequences make this a mighty – if somewhat overpowering – experience for eyes, ears and brain. 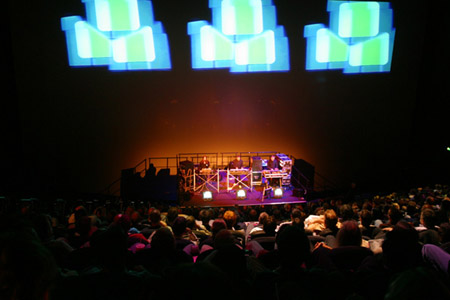 A more measured, minimalist performer graces the IMAX on Thursday night, as computer music pioneer and former Kraftwerk member Karl Bartos delights another full house with the sound and vision that inspired a wave of not just electronic artists, but whole genres. Kraftwerk songs such as Trans Europe Express and The Model sound fresh and rhythmically crisp through the excellent sound system, while recent works like Electronic Apeman show Bartos still has a gift for writing simple but effective songs exploring life in our computer world. The visuals – largely Kraftwerk-style sequences of bold, graphic symbols – seem somewhat secondary to the music, but with music this good, that’s hardly surprising. 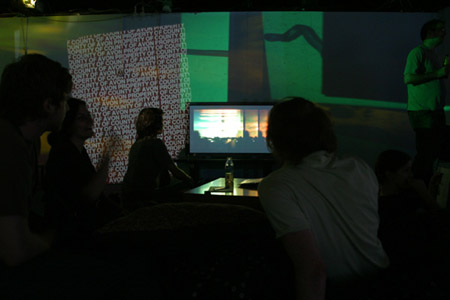 On Friday, the festival steps up a gear with performances at both the IMAX and NFT, while the Optronica lounge, a chill-out space decorated with projections and screens showing video installations from the likes of The Sancho Plan, offers a cool place to relax and grab a beer between shows. 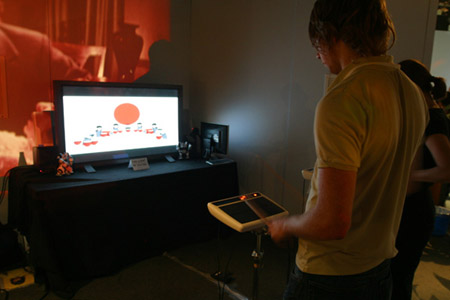 Impressed by last night’s performance, I opt to see Karl Bartos’s lecture The Interpositions of Media, in which he outlines how different forms of communication have shaped the development of society, exploring Marshal McLuhan’s idea that ‘the medium is the message’. It’s interesting to hear Bartos, a figure so closely linked to modern technology, decrying its limitations (particularly in the form of television), admitting he often doesn’t enjoy using computers, and professing his love for the simple three-minute pop song. 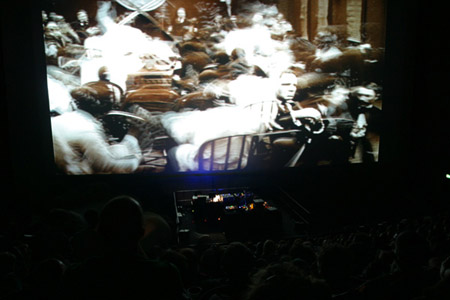 Moving over to the IMAX, I catch a short performance by Exceeda, whose work ranges from TV and film pastiches to brain-jangling computer graphics, before the main feature: Rebirth of a Nation, a film remix performed by New York video artist and all-round sonic wizard DJ Spooky. He retains the narrative of this 1915 silent film epic – a notoriously racist family saga set against the American Civil War and rise of the Ku Klux Klan – but overlays graphics to enhance certain scenes. His soundtrack, meanwhile, blends a brooding, atmospheric score, modern beats and haunting echoes of early blues.

Looping and repetition forces you to view and review the film’s images portraying the freed slaves as animals and savages, while glorifying the heroism of the racist Klansmen. This is uncomfortable viewing, but highlights the fact that the birth of US cinema also marked the arrival of a powerful propaganda tool for enforcing racial and social stereotypes. 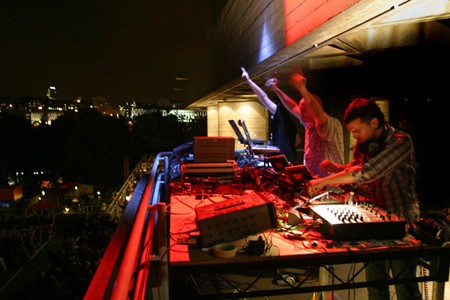 Emerging onto the South Bank, I rush towards the river to catch the end of Addictive TV‘s live, outdoor AV mix. The images – projected onto a giant concrete cube that forms part of the National Theatre – are visible right across the River Thames and puzzled passers-by thronging home over Waterloo Bridge are stopped in their tracks by the spectacle.

Up on the outdoor terraces of the theatre, the crowd – surreally seated in rows of deckchairs – looks up, and in places erupts into joyfully drunken dancing, to an audio-visual mix of house and techno beats, Elvis, the Rolling Stones and 1960s Brit-pop cinema classic The Italian Job.

While I missed the earlier, less dance-orientated Eye of the Pilot part of the show, judging from the encores I did catch, Addictive TV certainly grabbed plenty of attention with this high-profile performance. 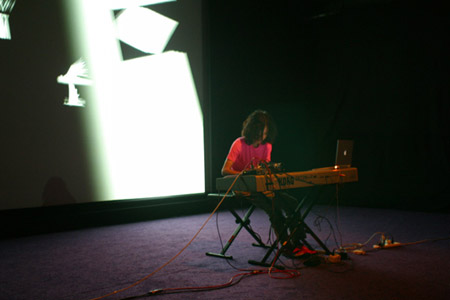 Back in the NFT on Saturday afternoon, Big in Japan showcases the work of Japanese visual artists such as TomoGrapher, Glamoove and Devil Robots. The following short live show by Masakatsu Takagi, a multi-media artist who has previously collaborated with David Sylvian, highlights the more human aspect of electronic performance. Takagi’s gentle, classical and folk-tinged ambient keyboard compositions are accompanied by simple, painting-style images, the two aspects evoking memories of childhood and nostalgia for distant yet familiar places. 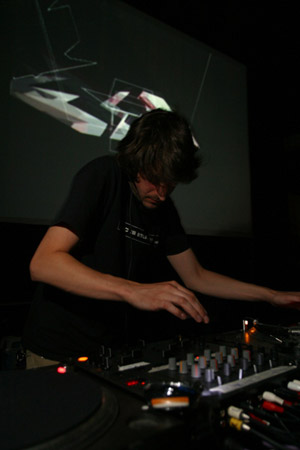 Saturday night is Optronica’s club night, with the festival crossing the river to East End venue the Spitz for an international line-up of DJs and VJs. The DJs – ranging from the UK’s Si Begg to France’s Joakim and Dutch remixer Legowelt – mash up everything from Kraftwerk and Siouxsie and The Banshees to Michael Jackson (!) and The Osmonds (Crazy Horses!!), backed by a selection of electro, house and techno beats. 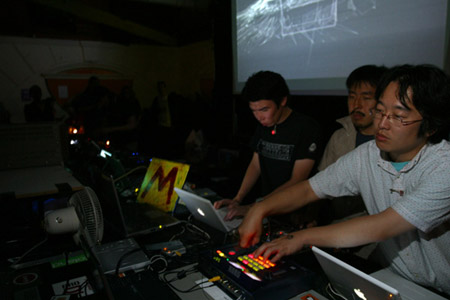 The crowd’s reaction through the evening reflects the dichotomy of VJ nights – do you stand and watch this stuff of dance to it? The row of DJ and VJ decks are clearly visible, rather than hidden away in a booth or on stage, prompting many of the more techno-geeky among us to simply spectate at close quarters as the performers go about their work. But as the place fills out and the drinks flow, most people realise that it’s possible – and best – to both watch and dance. 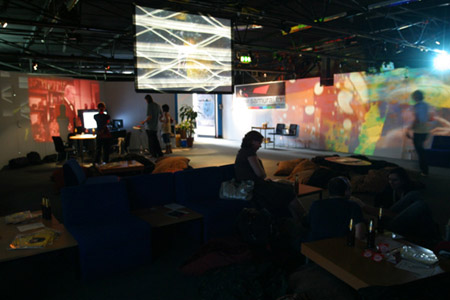 Optronica winds up on Sunday afternoon at the NFT with two events showcasing audiovisual work for film and TV. Optronica On Screen presents some imaginative and original (rather than sampled) work, ranging from 3-minute music videos to 9-minute short film epics.

Still suffering from the (late) night before, I wasn’t looking forward to spending the afternoon in a dark room being blasted by in-yer-face AV light and noise. But the videos shown have enough subtlety and variation to soothe my fuzzy head. Highlights include the post-apocalypse cityscapes of Long Time After; the strange, computer-circuit-board city conjured up in Generator P-730; the sinister, creeping death cloud portrayed in Intramural and Noxious; and the clunky, retro computer graphics of ZX Spectrum’s Orchestra’s Look & Listen.

The final event, The Best of Mixmasters, collects highlights from Addictive TV’s ‘chillout viewing’ series, in the form of 10 minute AV mixes. This selection features some fine work from many of the names who have appeared over the past few days, including Si Begg (in the guise of The Noodles foundation), The Mellowtrons, DJ Spooky and Exceeda.

Overall, Optronica brought together a fascinating diversity of performers to provide an in-depth report from the frontline of audio visual culture. The fact that it took place in the prestigious home of the British Film Institute suggests that AV artists are now stepping out of the underground and into the UK mainstream.

Also see selected highlights of the festival at: www.samurai.fm/optronica2005