The 2005 edition of the pioneering prize Premio Bonaldi per l’Arte – EnterPrize, dedicated to under 30s curators and now in it’s second edition, has been awarded to Andrea Villiani’s “No Manifesto“. An engaging exhibition that discloses the young Italian curator’s commitment in mediating finely crafted discursive dynamics among the six works while delivering a sense of instantaneous immersive enjoyment to the visitors. 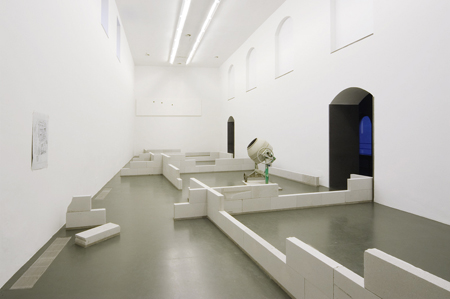 Mike Nelson, A Staging of the reconstruction of the Southern Palace of Babylon, 2005

Mike Nelson’s excellent “A Staging of the reconstruction of the Southern Palace of Babylon” (2005) welcomes the visitor in an environment that reproduces a modernised version of the palace’s building yard as described in a XIX century planimetry. Looking a little bit higher, one can spot Richard Wright’s monochrome gold foil compositions around the gallery’s windows. 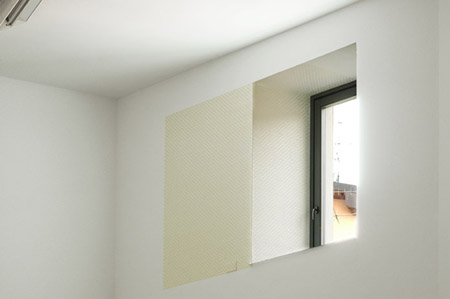 The second room contains seven beautiful and mildly disquieting Stefano Arienti’s “Erased Books” from the early nineties: the Italian artist cancelled, with a rubber, all the captions and texts from naturalistic photographic books to leave blank spaces around the images. 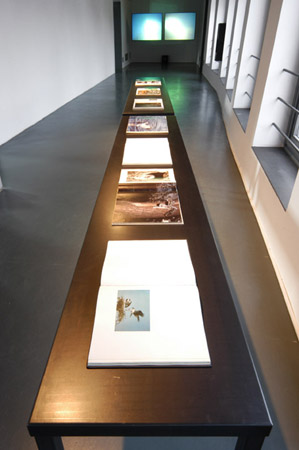 Anri Sala’s “Blindfold” (2002), is a video portraying the slow variations of sun rays reflected on two empty placards in the streets of the Albanian capital commented by audio elements recorded in Sao Paulo mixed with electronic and instrumental sounds. 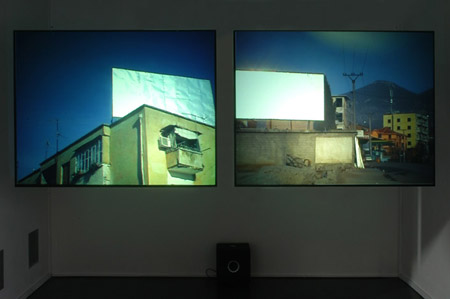 Massimo Grimaldi realised a small book, freely available to the public, in which he collected thirteen e-mail interviews with some of the key figures of the Italian art system, assertively mapping the margins and questioning the nature of involvement in this production field. A separate dark area of the gallery houses a Florian Pumhosl’s untitled video from 2003 portraying an ambiguously styled palace inhabited by a solitary Cyclops captured while performing ordinary life gestures.

Andrea Villiani, already curator at Castello di Rivoli, filled NoManifesto with different suggestions that descend from a dense conceptual framework – relationships between fiction and documentation, the vernacular and the intimate; recession from modernist standpoints – condensed in the rich downloadable catalogue of the show.