There is a building called Stadtbad Oderberger in Prezlauerberg, a district in northeast Berlin. It was originally a swimming pool, designed by Ludwig Hoffmann, an early 20th century architect, and used up until the last years of the former East Germany. It is not functioning as a pool anymore, but a steering association is undertaking its conservation while exhibitions focusing on neoclassicism designs take place. 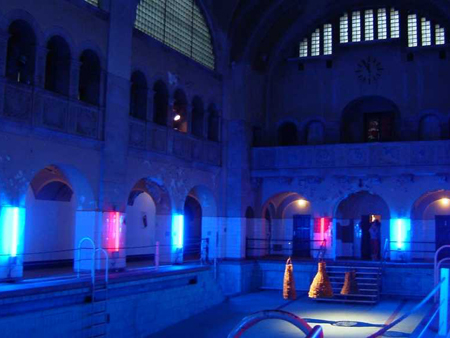 On the 28th and 29th of May, there was a group exhibition called “Trouble 1: Female Body” by female artists. Although the weather was unusually hot and stuffy with daytime temperatures reaching over 30 degrees, inside the venue it was cool, providing another world that was ideal for the installations. 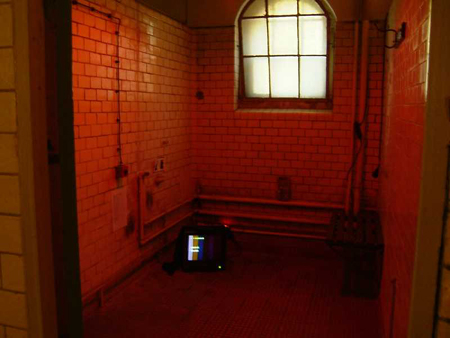 This exhibition took place on the second floor, which used to be a dressing room, a hall which was a bath, and several surrounding rooms. To begin, I went up the stairs to the second floor. The area was divided into some small rooms and displayed video and installation works by several artists including Celia Amitsis, Eva Kietzmann, and Betty -Sexyshock. 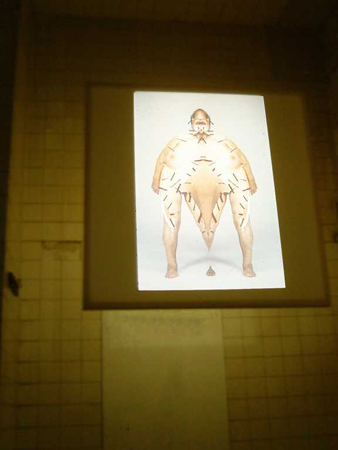 The hallway led to a 50m pool with installations by Ilka Berndt. The surrounding rooms had tableaus by Gonca Karapinar and pictures by Maike Klein. The most impressive work among these was a projection by Annegret Soltau which was a series of making new images of the human body, by using needles and threads as a motif of the human body. Overlapping the tiled wall with works, I had an illusion that it was a scary experimental institution, instead of the remains of a pool.