Pietro Roccalva‘s highly anticipated first solo show after he has been awarded with the important Italian Furla prize for contemporary art, isn’t the easiest to access. The entrance of the north Milan based gallery is firmly closed and the queuing public is slowly lifted, one person a time, to the Galleria Zero’s balcony in an enormous red wicker basket, mounted on a hoist. 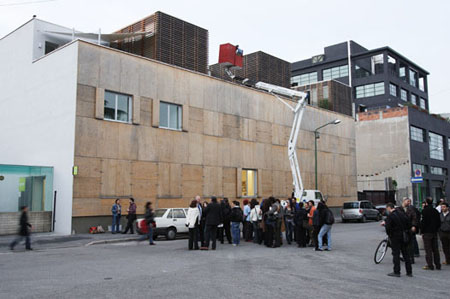 The forcedly solitary visit begins in an almost entirely empty space: there is only one painting on the walls, just before the exit, portraying the artist in the dimly lighted context of a previous installation project. On the way out, a gallery assistant – standing in an upside down, baseless red basin – distributes press releases of the show and invites hosts to proceed down to the gallery’s underground storeroom, an unadorned place normally closed to the public. 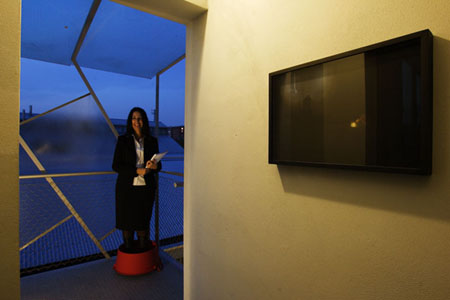 In this final setting, Roccasalva edified a horizontal wall on the floor in which a portrait of a woman is located near the missing circular portion of the previously encountered red basin. Alluding both to an enlarged version of the symbol that indicates a sold work in art fairs and to a setting sun that sanctions the end of this strictly regimented parabolic narrative. 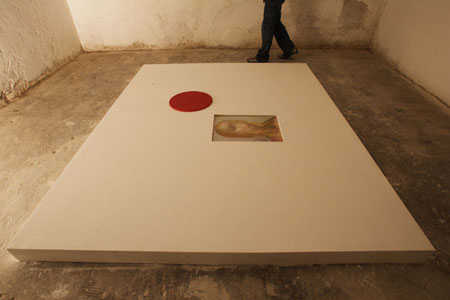 Tangentially informed by the artist’s re-elaboration of a pre-Islamic heretic version of the Zoroastrian cult, rejuvenates the metaphor – a vital element of his work – of installation as an extension of the classic painters’ studios. We assist to the emergence of a constellation of themes that could possibly translate into a painted iconography or, alternatively, could be discarded as peripheral mechanisms of an ongoing set-up.