The person who has taken charge of the cover design for this edition is Bob Sanderson who used to be a chief designer of The Designers Republic (TDR) and established his own studio in 2004. We interviewed him and discussed his extensive activity and making the studios message one of content and varied innovative style.

Hello, My name is Bob Sanderson. I’m a graphic designer and art director. I studied graphic design at Central Saint Martins, London. After that I briefly worked in Amsterdam. I then became a Designer/Art Director at The Designers Republic. I decided to leave tdr and through time set up a studio in London called Sanderson Bob. 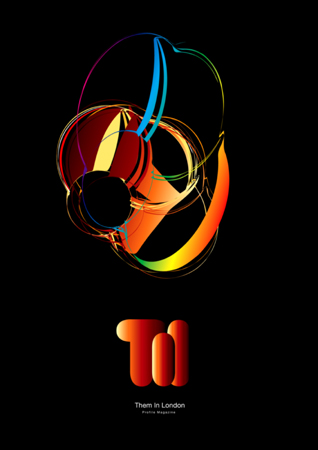 You established the Sanderson Bob studio in 2004, what prompted you to start this studio?

I had left TDR and moved to London where I created work for clients including Mother & W+K Advertising plus Gerard Saint at Big Active. I was happy going to these places and creating new material. I got a good insight into how different companies worked. After time I found myself creating more and more work under my own name and so decided to set up a Sanderson Bob studio. It was a very natural progression. And it’s the best thing ive ever done.

What’s your activity at the moment?

Major activities at the moment include creating Grrr Quack project for Paul Smith London. Developing my own clothing label called Yutaka Tajima. Im collaborating with some great artists, including Nicola Pecoraro and Jethro Haynes. The whole story is coming together really well. The label is named after a high profile Japanese business man who is employed to rescue high profile multi national companies that are failing their targets. The whole idea of the label is that the designs are based around the shape of a simple geometric Y. This shape is than enhanced, challenged and abstracted as each artist interprets it in his/her own way. The shirts are available in London and soon to be distributed to Japan. Im also being represented by a video production company in London. Im excited about the new possibilities and challenges this will bring. I have just re branded the music label Scuba and I am art directing a new profile magazine called Them In London.