Traveling from the World Trade Center in New York City to Exchange Place, New Jersey on the Path train could be considered tedious at best of times. But when my girlfriend grabbed my arm to tell me that I was “missing the animation in the tunnel” as we sped beneath the Hudson River I remember looking up and being captivated.

I’m sorry if this is old news, if I’ve missed the boat and everyone knows about this relatively new form of advertising, but I thought it was cool! It turns out all I saw that day is in fact just another gimmick for advertisers to get their name out there into the masses, and this particular gimmick has been running successfully on the Path train since June of 2002. The animation is accomplished through a series of stills placed side by side on the walls of the tunnel in a filmstrip arrangement and illuminated from the back so that the speeding train becomes one big giant flipbook. 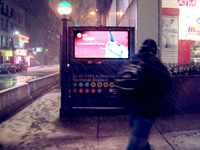 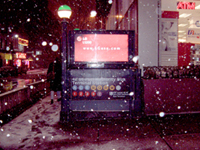 Since then, I’ve been thinking more about how we are becoming increasingly exposed to moving imagery, competing for our attention. It seems to be creeping into many unchartered corners of our every day lives: screens in cabs, at subway entrances, in shop windows, on billboards, animated ads on ATM’s, menu screens in McDonald’s, and signage on buildings that’s sometimes as synonymous as the bricks and mortar of the buildings themselves. I’d be exaggerating if I said it was absolutely everywhere, but New York is definitely getting brighter these days!

Times Square is the most extreme example of what I’m talking about. Walking through it on any given night is evidence of how in your face much of the signage and motion design has become in its fight for our attention. Full-motion video on increasingly sophisticated high definition screens has become the benchmark for anything that even stands a chance of getting noticed. The recent MTV sign in Times Square is a prime example of how a high-resolution screen and some eye catching content can stop passers by in their tracks. I stood and watched it for a good 10 minutes before frostbite began setting in. This particular part of the city is said to receive an average of 1.5 million passers-by daily, which explains why MTV along with other companies went all out!

So where will it all end? That question is as open ended as technology itself, but it’s worth noting that Submedia, the company responsible for that animated ad I saw on the Path train say that with existing technology they can create similar ads that work simply by the speed of pedestrians on foot, Who needs a train? And with ad companies scrambling to reach out in new and novel ways this could be just their ticket. Just get ready for the lawsuits from concussed viewers who can’t take their eyes away.