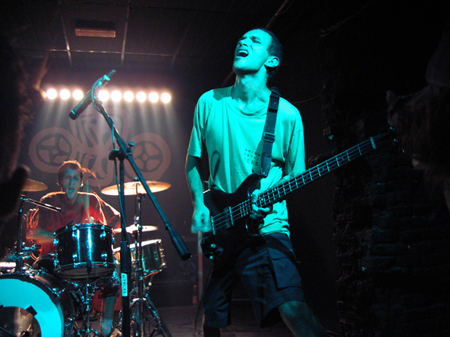 Lightning Bolt, the two-piece band from Rhode Island (USA) played an electrifying show at Milan’s COX (otherwise know as Conchetta) social center. One of those shows I’m glad to have not missed.

Though it may be hard to imagine in many other countries, in Italy, communists, anarchists, punks, hackers and ravers have occupied abandoned factories, schools and churches and transformed them into cinemas, concert halls and art galleries. Far from being the filth pits squats often are elsewhere, Italy’s social centers have been among the country’s most vital cultural institutions since the mid seventies; in Milan among the only, considering the council’s and the town’s appalling and risible cultural output. 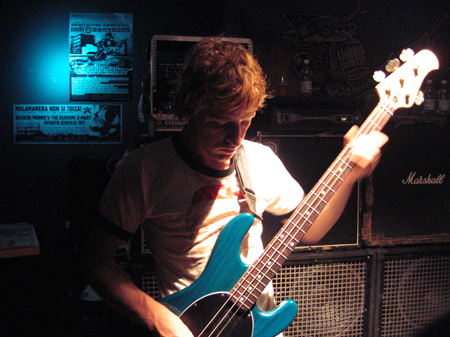 The show was the second act of a Zufest night, a festival organized by Zu, without doubt one of the best bands currently playing in Italy. In the same show they played an excellent set with Matt Gustafsson’s abrasive free sax lament but by the time Lightning Bolt stormed through their second track the night was already set and stolen.

Having never played on a stage but usually setting up on the floor and promptly starting when the previous band’s gear is still cooling down with it’s last shade of feedback, Lightning Bolt stir up a sonic steamroller that packs the punch of a locomotive in your face. The mosh pit immediately falls to the devastating aftermath of an aural nuclear blast, guaranteed by the 3800 watt bass amp kicked directly into your teeth. Such was the mayhem I could hardly take shots of the band without getting my head elbowed, literally slung around by the crowd gone berserk. 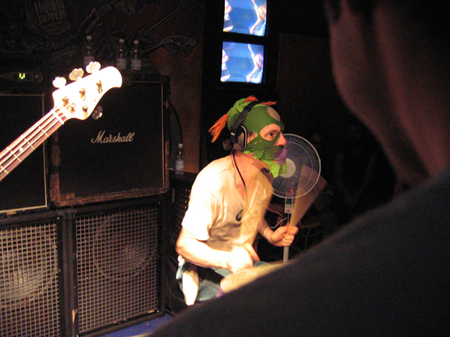 Rarely have I seen such fury and power unleashed on an audience and rarely have I been to a concert, attending with ear plugs and leaving with worrisome akufens that were still as spiky as a shattered bottle four days after. Relentless in their speed thrash ride they initially seemed to have the same repetitive primal pattern reminiscent of early acid house, but with a venomous kick back of obnoxious low-fi screaming and thunderous feedback pounding that gives you the feeling that you’re actually standing in the middle of a reactor, where the band is gradually pushing the ignition to it’s highest peak: as a matter of fact the power is like nothing I’d ever heard – or I could add the word felt – before.

Brian Gibson plays a bass that may as well be a guitar, crunching incredibly fast riffs through a field of deafeningly loud squeals and glitches, tons of feedback compressed into a thick wall of noise, making what is normally defined metal sound tame; and Brian Chippendale plays drums, his performance being nothing short of devastating, without any exaggeration, but still technically very precise and tight. The relentless spew of violence, that rips the crowd apart with it’s compressed and insane volume, makes Lightning Bolt a demanding gig, especially on the eardrums. The only brief moments of pause break in when the drums step back, allowing the bass to grind and chug solo, then the two return to lay down bass-and-cymbal stomps all the way up to a belting climax, the sort of crescendo that makes a room stop, bang their heads, and kick back to the mayhem, almost finishing over the band.

Their often cited experimental ethos is particularly evident in the intentional lack of control over noise, allowing it to run wild and chaotic; eschewing many conventions, from the stage presence to the monstrous volume, the level of distortion is so high that you could consider Gibson’s bass more as a sound weapon than an instrument, capable of inducing adrenaline rushes and palpitations, aiming at the audience’s physical resistance.

On many things I usually agree with my mate Tom: and this evening made no difference, we both left with similar feelings. This was one of the best gigs in town this year, the best since Acid Mothers Temple and Ruins’ New Japanese Music Festival at the Bloom. Too fast to define, too loud to pass by without leaving bruises.

This isn’t your average live set, it’s what this city needs more of, brutally hammering away at the established boredom that seems to have made bullshit fashion the town’s only creative resource. With a towering set of amps stacked up behind their backs, Lightning Bolt left us with a memorable slab of devastation we long awaited.