OFFF 2004, the fourth edition of Spain’s festival of ‘experimental audio and unusual video’, was held in Valencia between July 1st to 3rd. Devoted to exploring the most groundbreaking work currently done in fields such as web and graphic design, digital arts and experimental electronic music, the event comprised concerts, projections, presentations and keynotes, round tables and an exhibition area. 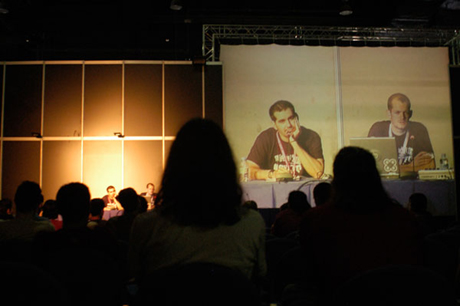 2004 has been an important transition year for OFFF and its organizing team. While the first three editions of the festival where held in Barcelona, this year the festival decided to change its base and moved to the city of Valencia. While Valencia is also a major Spanish capital, it undoubtly lacks the international projection of a city like Barcelona that is constantly receiving visitors from all over the world. However, resources provided by the local government have allowed OFFF to grow and become a much more ambitious project. And while the OFFF team was afraid of losing many of the international visitors that used to come from all over Europe in the previous years, most of the regulars were here again to enjoy the fine food, the great weather and the excellent digital art.

Although the festival started officially on thursday morning, the previous night a nice reception party was held for the almost 100 artists coming from all the world to perform or take part in the presentations, discussions or exhibition. The party is a perfect example of why most participants love OFFF and many of them come back again in following years; the atmosphere is friendly and relaxed, and everybody is determined to have a good time. For a lot of artists it is also a chance to meet face to face with people they are in contact with only through websites and forums, specially for colaborators that work together in projects on the Web but live in different cities. 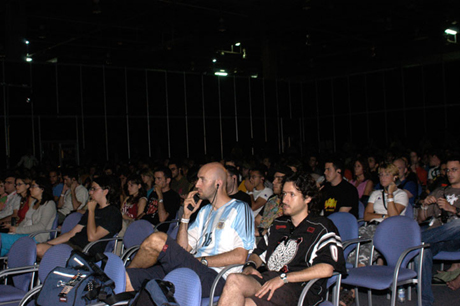 OFFF was held in a whole pavillion of the Valencia Fair, a big trading facility that was transformed in an interesting, intimate place by the design team of the festival. Nice details included searchlights hanging from the celling, and gangs of little toy robots ‘hanging out’ in the corners. Festival areas included two rooms for conferences, one room for projections and audiovisual programs, a room for music performances, and an exhibition area witn installations and graphic design projects. 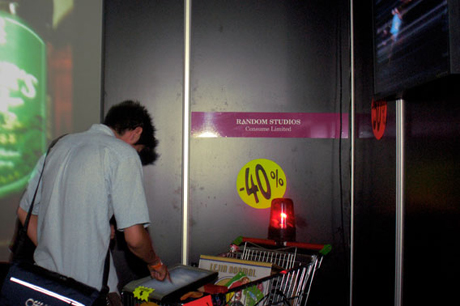 This included works like Movet, by Area3 -an interactive piece where graphics projected on the screen could be modified by screaming, yelling or whispering through a microphone-, or the surprising interactive shopping trolley by Random Studios, along with other projects by Lessrain, Elixir Studio, and others. But the main highlight in the exhibition area was a retrospective of the work of Joshua Davis at Once Upon A Forest. The celebrated Flash guru has been a supporter of OFFF since the first edtion and this was the first year he couldn’t make it to the event; instead, he chose to exhibit in an installation every piece he has done for the pioneering site that showcases his most experimental work.