Local Indie music and punk rock (not your pop wannabes) has been steadily gaining a foothold in the local music scene. With bands gaining recognition, such as the acclaimed reviews for local group The Observatory’s first commercial release “Time of Rebirth.” To the growing popularity of street culture and all that accompanies it, Baybeats 2004, the annual Indie/ punk rock music event in its third year running provides an alternative platform and outlet for bands and music lovers alike. Held in the most mainstream of locations, The Esplanade, Theatres by the bay, this year’s Baybeats sees an international mix of musicians bringing the vibe to the city. 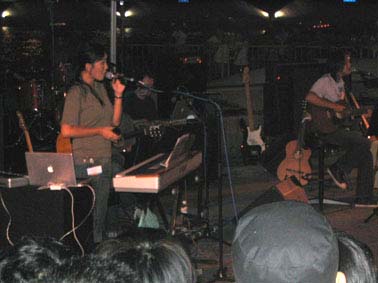 The lineup of bands includes Singapore’s own Force Vomit, Vertical Rush, The Observatory, and The Analog Girl amongst many other talented local acts. Baybeats’s strength has always been introducing fans to foreign acts, bringing the level of exposure to new heights. This year was no exception, seeing the likes of international acts including Love Me Butch and Aloe in the Bottle from neighboring Malaysia, with SuperMarket Hero, Blueline Medic from down under Australia, Kenneth Ishak from Norway and Last Days of April from Sweden. Fans went wild at the Arena Stage, which was free standing, while others grooved to the beats at the Chillout stage, which was packed, leaving little room to see the musicians in action. 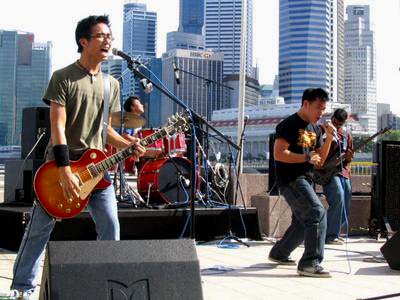 This year’s Baybeats sought to satisfy both audibly and visually. With an exhibition at the link from the Subway station to the venue (aptly called the tunnel), Rain Or Shine – Photographing Music traces the history of rock music through photography of Brian B Rasic. Rasic’s works have been featured in the likes of Rolling Stone, Playboy, Vogue and was present to give a presentation of his works and his thoughts on his work. 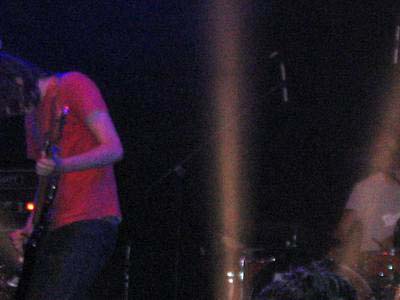 Another addition is the Electronika showcase at the concourse, bringing the vibe indoors as technology brings a new twist and a new beat to an old sound. Armed with laptops and other technological gadgets, the likes of Circadian And A’n filled the space with their unique sounds and beats.

The sheer size of this year’s turnout must have surely beaten last year’s turnout of approximately 13,000. Baybeats belongs by the bay, it would be unthinkable for the crowds to enjoy the music without the salt in the air, the skyscrapers in the corner of the eye, the lapping waves hidden behind the music.