Koji Morimoto worked on the film “Akira” directed by Katsuhiro Otomo, a music promotion video for Ken Ishi and a piece for “Animatrix”. He is an animation director who is attracting a great deal of attention internationally with his unique style. In July, he will hold a commemorative exhibition for the release of his book, a collection of his first works, at a new shop called “Shop 33 Kichijoji” which is a satellite of the mixed media shop “Shop 33“.
We caught up with the funky animation director for an interview, even though he is busy in the midst of working on his next film. 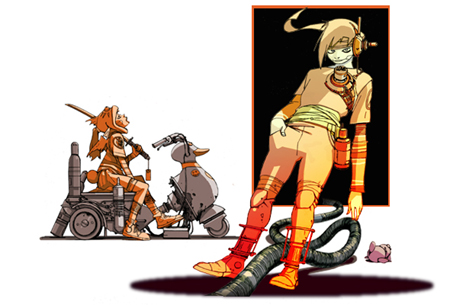 You are one of the starting members of Studio 4C which produces unique animation works including the recent film “Animatrix” (an anthology film of “Matrix”). Can you tell me the story behind how you started it?

I wanted to have a harem (laugh). I was going to be the head so that I can control everything but the reality is… I am controlled instead.

Whatever I can enjoy. Basically, I’m playing with painting. I’m also doing an event called “Sound Kickers” secretly (!). I’m now planning the next project with Shop 33. 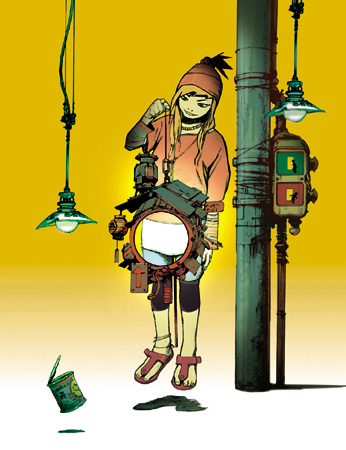 When did you decide to be an animator? Is there anything that opened your way?

I was impressed by a scene of “Space Battleship Yamato” in which the main battery comes out from the ground. It reminded me of a male thing. (laugh) Also a scene from “Nausica of the Valley of Wind” when that Giant Guardian belched fire under a command by Tolumekian imperial princess Kushana. I’m sure it’s a man’s ejaculation, the second shot becomes weaker..(laugh). I’m always attracted by such scenes. I don’t know if the director actually intends to but I’m confident that such male physiological things are hidden behind those scenes. I guess a man can understand what I mean. The reason why I became an animator is that I like thinking about “how will this strange character speak?” or “what will they say?”. Animating the character, they will have a life. I like it very much. In other words, an animator can also be “a god on paper”.