On one Friday night, I get a phone call from a friend asking me if I want to stop by a gallery opening. I ask him what the show was and he tells me, “Oh, some drawings and illustrations.” Nothing particular to do that night, I head down to the gallery in Chelsea to meet up with him.

Upon entering the gallery, I’m encountered by a set of drawings and paintings that are rather rough and crude. Many portraits of various men, the sizes of the pieces vary from a small notebook-size drawing to a floor-to-ceiling-size painting. Examining closely, I notice that the paint has a dark brownish lacquer-like quality. Although the pieces do look crude, they seem by an artist who is quite skilled at his artistry. I also observe that the men portrayed in the paintings have similar clothes. I look around the room and find paintings of not people but guns. 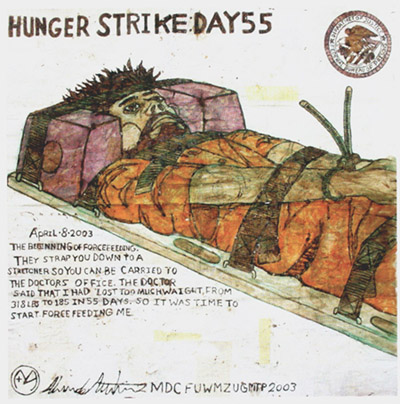 Walking around somewhat mindlessly, I am found by my friend who had told me about the opening. He tells me the background story of this show. It turns out that the paintings are by a man who is currently in prison.

A year or two ago, there was an article in a newspaper about an artist who was arrested for forging various Jean-Pierre Basquiat paintings. Some of the forged paintings were so convincing that they sold for over hundred thousand dollars. The artist’s name is Alfredo Martinez and the paintings in the gallery are by him.

My friend tells me further that because he’s in prison, he has very limited or no access to paper and ink. He creates his “canvas” by making papier-mache from books and newspaper that he can get his hands on in prison. His “paints” are made out of coffee and other liquid supplies around him.

Early this year, he was sent to a solitary cell in prison due to the nature of his gun paintings. Prison guards and personnel decided that he was dangerous. As a response, he went on a hunger strike. Every meal he was served in his minuscule prison cell, he flushed it down the toilet. After 55 days, he had lost so much weight, from 145 kg to 84 kg. On April 8 of 2003, they started force-feeding Martinez to keep him alive.

The price tags on the paintings are quite hefty. Some of them are several thousand dollars to close to ten thousands dollars. Though not at the level of Basquiat, Martinez might one day reach some kind of fame and wealth. It is quite ironic what got him into prison in the first place.