Chris Ware is my neighbor. I’ve never met him, but when I heard that the famous cartoonist recently moved from the city’s North side out to our sylvanian, sub-urban borough, I was compelled to no longer put off a thoroughgoing perusal of his much lauded, frequently praised opus, Jimmy Corrigan: The Smartest Kid on Earth. 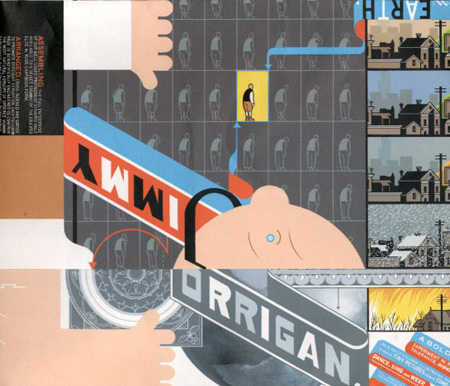 The book clearly deserves its every laudatory mention. Right from the beginning, its design inspires fetishistic attentions. Under the editorial eye of Chip Kidd, the cartoonist himself designed his book to have an odd little brick-like shape and heft. It’s oblong pages lie flat, and a richly scented (soy-based?) ink has been laid onto heavy, uncoated, cream-color pages. 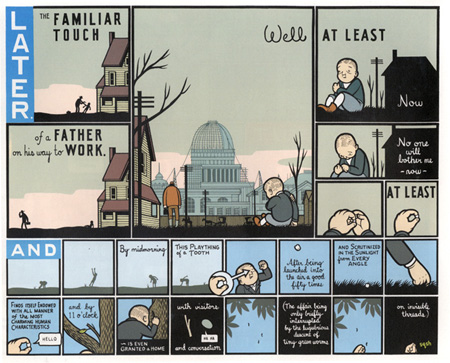 Jimmy Corrigan is an anthology of cartoons that appeared in serial form in the pages of Chicago’s New City magazine and Ware’s own ACME Novelty Library from 1993 to 1999. At the center of the book, evident upon the most cursory glance at its contents, is #1: an absolutely bleak view of the modern world, and #2: a nearly religious devotion to, and evangelical promotion of, the more civilized architecture of communication that Ware finds in old-timey music, vintage print advertising, illustrated booklets, pamphlets, gazettes, broadsheets and tracts of all kinds. 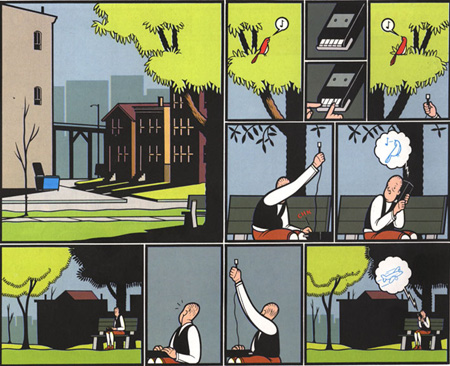 Finally, Mr. Ware’s playmaking with the comic-strip medium is almost as much a subject as his characters are. His cartooning language has been called musical. Rythmically like rag-time, jazz, and visually like a player-piano roll. Ware’s art finds it’s substance in a brew of antipathy for the anonymous, inhumane products of capitalistic excess and mass production, and a heartfelt love for the hand-made, personal, emotionally dense surfaces of baroque, turn-of-the-century clutter.