The fourth round of Sound Republic was held at THINK ZONE in Roppongi, Tokyo on the 1st of March under the theme “collaboration with the electro media and creators from various genres.” There was a downpour on the event day but the number of visitors reached to about 900 and they enjoyed a mixed space of high quality sounds and motions. 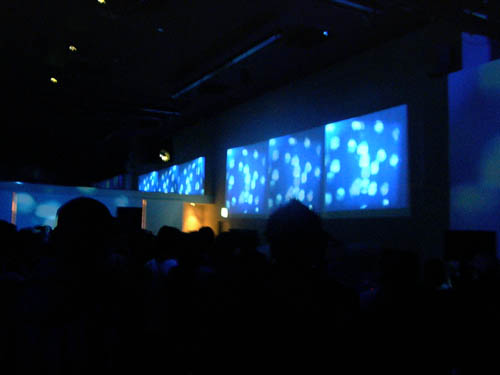 Motions of Unit9, Fixer, Jonny Hardstaff and others were projected on a floor and three walls. This effect made me feel as if we were in a visual tank. Sounds of Klock, Funkstorung and Akufen from a special sound system for only this event were fish that swim in this tank. 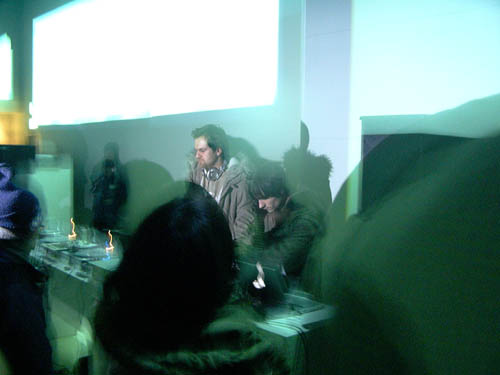 The highlight of that night was a 2-hour- live performance of Funkstorung. Their electronica jam session from laptops was a very awakening of a digital sound and their rhythm made us feel a physical excitement. Luckily, I had a chance to talk to them after their performance. According to them, they had other performance at a different place on the day before but they were satisfied with the one at Sound Republic more than that. “Japan is like a totally different planet like Mars for us.” They lively gave this answer with a glass of beer to my question what an impression of Japan is.

“Akufen” also seemed to play in a relax mood. They freely walked around the venue after the performance to enjoy this event in their own style.

A participation of a production company from UK Unit9 should be mentioned here as well. unit9 made animation sequences for the web cinema “Trunk” and Sound Republic had partnership collaboration with this cinema. This connection brought a VJ performance of Unit9 to fruition and they showed munificently their pop and humorous animation. 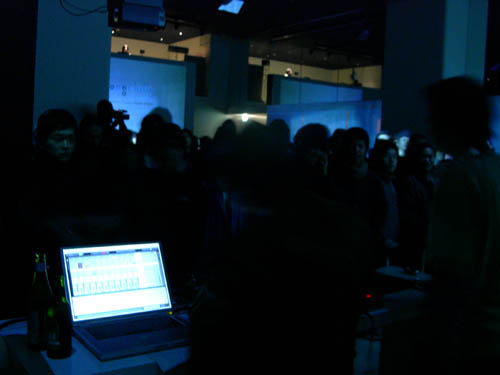 “Trunk” was the first project in Japan they did. “Expressing something on web is a great since more people can see it than other media. Also, we can expect the multiplier effect through projects with Japanese companies and creators. This brings us a chance to expand our range of potential. We are enjoying of today’s performance as well.”

It can be said that their words imply a part of aims of this event. I believe that visitors could feel and enjoy of the potential that the electro media art has as well.