“Farmers Manual (Presentation+Live) by Salon/Sputnik” invited Mathias Gmachl to be the main guest at “Farmers Manual“, performed on August 9. In “Roppongi Hills Information Center/Think Zone“, the feast of image and sound by portable[k]ommunity,Nao Tokui,710.beppo, Takamasa Aoki form Silicom, and Mathias were exhibited with 23 projectors. 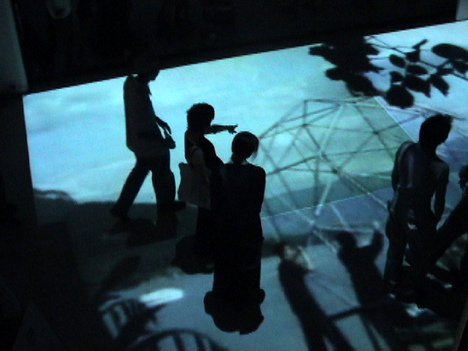 The venue “Roppongi Hills Information Center/Think Zone” is a facility which transmits the latest information of the new Tokyo landmark “Roppongi Hills”. It has 16 permanent projectors on the ceiling which project high quality images all over the floor. Furthermore, an image with seven projectors is also projected on the surface of a wall. Twenty-three projectors wrapped the space with image. Drinks and food were offered in the book cafe set up on the side. There were many ways of enjoying oneself, seeing images while relaxing at a sofa, listening to the sound while laying on the floor, and so on. 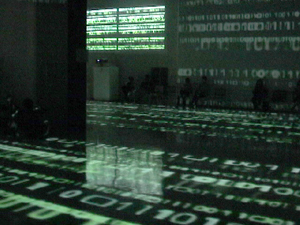 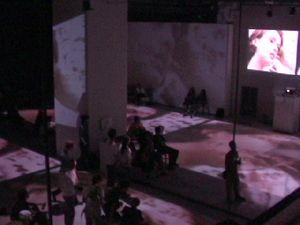 To begin with, Mathias made a presentation about his works with Shusaku Hariya from “Salon-Magazine” This DVD-based presentation covered the following topics: the origin of a “Farmers Manual”; its own software; the limit of a program; and DVD currently being manufactures. Although it was somewhat hard to hear, subjects such as how he came to make software with himself (because of it became impossible to be satisfied with the existing work), the limits of computer programs and it may be able to be done by people, were heard with empathy. 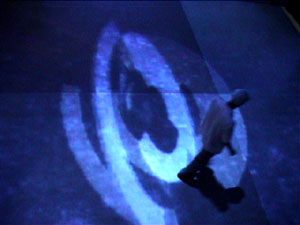 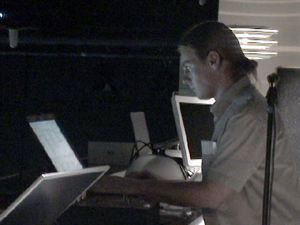 The performance by 710.beppo after DJ, the image space synchronized with the noise covering an extensive zone and its sound completely by Max/MSP/nato.0+55+3d modular was created on two sets of iMacs.. 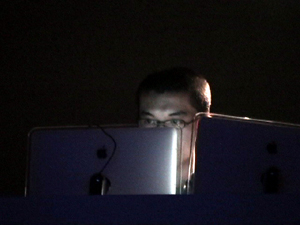 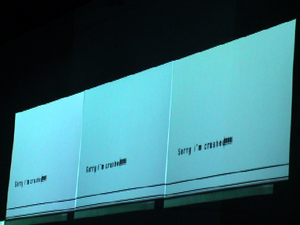 The performance of performed portable[k] ommunity was performed, mixing the music of collaboration with Aco whose guest participation was suddenly decided on the same day. The spectators were wrapped in the live performance with high-speed images with an offensive and rhythmical sound to which a speaker raises a scream. Applause broke out when each music piece finished. The cover of “Material Girl” of Madonna by Aco and portable[k]ommunity were performed at the end of the live shows matching the computer animation of a Sony processed by Nato. For me, it was the best time in this event. 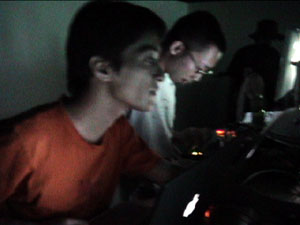 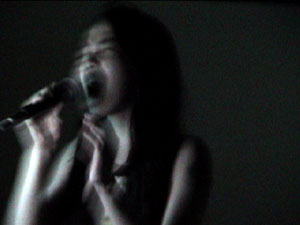 After DJ, Mathias performed. His work consists of quiet images and sound, and had wrapped the hall in a quiet atmosphere for some time.
The next performance by Takamasa Aoki also known as “Silicom”, while portable[k]ommunity participates as VJ. The track produced from the patch that firmly consisted of Max/MSP, and people who dance while looking into a patch were impressive. 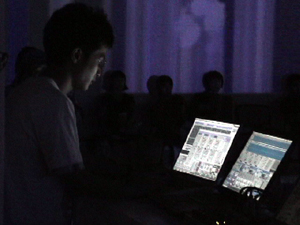 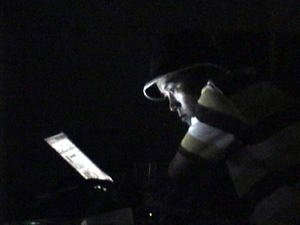 Nao Tokui, alias “Clickety and Clack” also known as a developer of Max/MSP/nato objects. In spite of the accident of in which the sound stopped, his music resounded through “Roppongi Hills Information Center/Think Zone” entangling the images by 710.beppo. It was the most intense of the recent performances and created a new appreciation of the importance of the space in live performance, such as the atmosphere and the sound/visual systems. 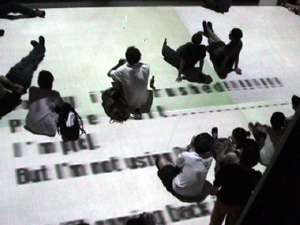 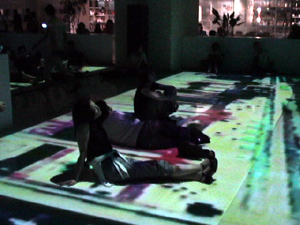 The performance by the laptop computer has become more common the past several years. Probably because the figure that faces the computer is in an unnatural position it often seems a little bit tedious. However, it seems to still have the possibility to present space united with sound and image using the setting’s peculiar equipment and environment efficiently. This time was no different “Roppongi Hills Information Center/Think Zone” has a time limit by spring next year. Now, various plans are in progress. If you have not experienced this space, I recommend you to go through there once.

While writing this report, “Jitter“, an image processing plug-in for Max/MSP was released from Cycling74. When I used it for a trial, it demonstrated the ease of using of the latest technology, and it impressed me with the possibility of new sound/image expression.

I n September, Takamasa Aoki, Clickety and Clack, and portable[k]ommunity will go on a Europe tour. If you like this report, go to their performance and feel it!