Afterwards Valerie Casey who oversees the interactive group at Pentagram’s San Francisco office designing product interfaces, Web sites, and software spoke about the important Factors in User Centered Design. She explained that idea feasibility, concept viability, and especially, product desirability form the framework that encourages interaction designers to consider the ethical, social, and creative implications of their work, and ultimately will help them make more viable and relevant products. 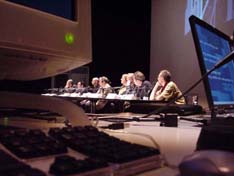 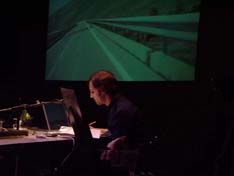 Subsequently, Arnaud Mercier spoke about his own experience of web designer. This French graphic designer is the author of Elixir Studio, and he currently is an art director at Blast Radius (Vancouver). He deplored the bad conditions of works that he lives and he explained his manifesto. He promoted along about twenty items of good way of work for web creators. These items were about relationship between the web team and the project management.

Finally, Jean-Sebastien Colson, a web producer explained how web design is produced in a big web-agency as babel@stal. He spoke about difficulties to manage productivity and creativity. To conclude this session, all the orators debated their points of view.

The next topic was less theorical and more visual : it was about interactive cinema.

During this session, different lecturers showed their work. Chris Hales explained that techniques he employed include spatio-temporal linking (having to click in the right place at the right time), split-screening and use of screen space, a strong feeling of causality, and specific choices of subject genre.

Instead of that, Luc Courchesne showed his immersive environment. He created methodologies to record and project 360° video. Also Michael Naimark showed his experimentation in Interactive video. In an other way Xavier Boissarie presented the imaginary ballroom, this is an interactive piece realized in 3D real-time. Subsequently,the final debate was about the difficulties to conciliate narrative and interactive structure. 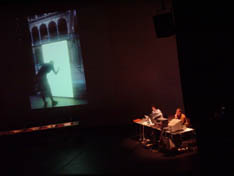 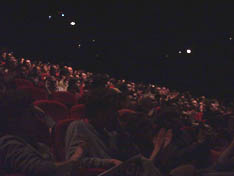 The next day, the first conference was about creativity and formalization and in summary about programming as a creation. Olivier Koechlin came speak about a digital material. he think that digital media is not built by code or software but a concept. This concept is expressed by algorithmic. Jean-Jacques Birge spoke about sound in interactive context. 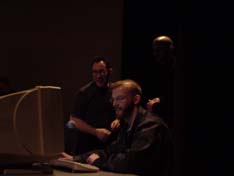 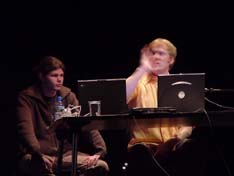 Next, Golan Levin demonstrated his Audiovisual Environment Suite interactive software and its accompanying audiovisual performance, Scribble . He explained that he became a coder because software as director was too rigid and limited, he would like to be able to draw one point but also to control all the screen’s pixels. Ben Fry and Casey Reas had recently completed their studies the MIT MediaLab.They introduced their new programming environment called Proce55ing. It is an environment for programming images, movement, and interaction. It is a sketchbook for developing ideas, a tool for creating prototypes, and a context for learning the fundamentals of computer programming within the context of creation. They spoke about Proce55ing in relation to existing interaction design curriculum and current software/hardware tools for building interaction.