Most known as a man who ‘goes back’ to the ocean in “The Great Blue” (1988), Jean-Marc Barr has greeted Hollywood this time as a director, with his production partner Pascal Arnold. “Lovers” (1999), which also won a certified title of ‘Dogme #5’, and “Too Much Flesh” (2000), which Barr has a main role in front of camera, are the first two of the trilogy about freedom. Former deals with the freedom to love whomever you want, and latter explores in freedom of sexuality. Both films have been applauded by European audiences (and Japan as well), yet surprisingly, this turns out to be the first premiering in the City of Los Angeles. Must come to realize once again, how culturally blinding it could be when you have the mass-producing commercial film factory right above your brows. Hollywood could easily let this happen which became the dilemma for many film makers amongst all these years. 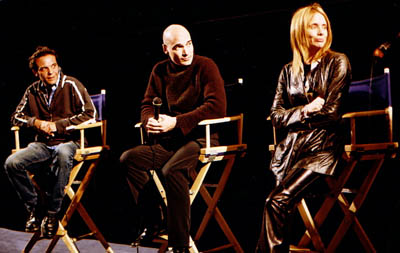 Born between American father and French mother in Germany, Barr resided in America, UK, and now down in France. Mainly to part from the American mainstream film making, where films are marketed towards the youth, and designed to cater their consuming tendency, Barr headed for Europe in search for more raw environment. Insisting on to be credited as “European Film Maker,” he goes on to explain about their film which was taken with compact and intimate DV, Sony TRV900P. Apparently “Lovers” was made with 1/5 or 1/6 budget of the usual feature length movie shot on films. Also intimacy and the immediacy was allowed in relationship between the actors and the camera. Barr and Arnold’s part on this film can be credited in full; original screenplay, direction, camera works, editing, and even to promote the film. In his voice, you can hear the passion and sincerity towards its own creation. His destination for this promoting tour goes around the globe.

The screening venue was Egyptian Theatre, the home base for American Cinematheque. Since their dawn in 1981, American Cinematheque has been hosting numbers of film screenings, usually followed by the appearance of film makers or actors. Their selection diverse amongst many countries and cultures, and yet they cherish the immediacy of “Hollywood films” as well. Lately, Egyptian Theatre has been supportive to many film festivals, i.e. AFIand RESFEST just to mention a few.

As an actor, Barr has starred in many Lars von Trier films (“Europa”, “Breaking the Waves” and “Dancer in The Dark”) and two naturally became very close friends. DOGME 95 rules came rather casually to Barr when he came across Dogme films in von Trier’s guest house. Following is the famous THE VOW OF CHASTITY, the must requirements to be certified as the Dogme film by the Brothers.