Amongst many festival that Los Angeles hosts, Resfest is probably one of the few that is not so much about the party, but the one that presentation of the actual technology and skill speaks. Every year, kicking off in San Francisco, digital film festival Resfest greets the world with new language. Festival taps L.A.’s shoulder and whispers into the ear “..and you know what it’s all about, don’t you?” Directed by Jonathan Wells, this festival counted its 5th birthday this year. 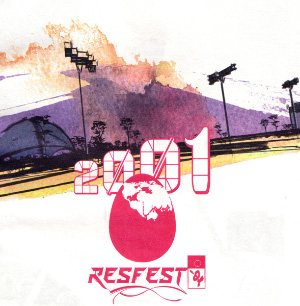 Resfest, where pioneers of the digital world show off their craftsmanship, has been gaining the popularity year by year. Many attendants are either film makers, animators, and/or graphic designers. After each showcase, most of the conversation includes names of the softwares like Flash, Maya, After Effects etc. Some came for inspiration, and some came to see what the utensils they’re learning can possibly do. By focusing on the film that are made digital in one way or another, its clarity in theme and especially with this year’s defined programming, Resfest 2001 was indeed beautifully curated. Each year, Resfest would not fail to come up with an eye-candy and surprise the audience in a new way. Much part of digital film making is yet left to discover. That makes the annual extravaganza a much anticipated one, show casing well selected fresh out-of-the-ovens.

Film length varies from 1 minute to 40 minutes. Reflecting the rising numbers of submissions, 5 themes divided the shorts program. #1: Altered States, #2: Human Nature, #3: High Risk, #4: By Design, and #5: Directors Club. The most popular program Cinema Electronica (music videos) returned with applaud and new entry “The State of The Art Film Titles: Openers 01” produced by DesignFilms provided the insight to the little-understood, under-appreciated field of film making; title design. Festival program explains that title designing “…has long been cherished by designers and film buffs for its ability to fuse graphic art, sound and music and motion.” Resfest is definitely growing and would only keep defining itself in many more years to come.

Followings are the few of too many that have entertained me during the festival. 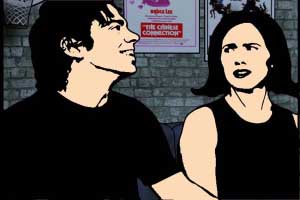 Bizarre nature of human being invites you to the wonderland of dark humor. What if your worst date ended up hitting it off with your best guy friend? And what if your time with him has been sacrificed because of this new buddy? And to finish it off by random old girl friend that you ran into buddied up with these two in less than a second? Amy’s self esteem tanks way down. Digitally painted figures with the dark color palette adds the reality to the storyline, and will only make you chuckle harder. 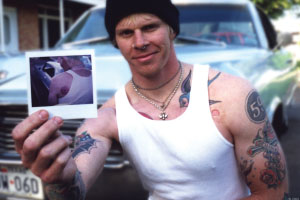 Have you ever imagined that the ultimate form of body art after tattooing and body piercing will go this far? For first 16 minutes, I thought I was witnessing the history. The suburb-ness and the actor’s self centered monologue was too convincing. The most rich storyline amongst other entries. Viva Jerome.