Finally my first Amsterdam Report… As I am not a journalist, nor an objective viewer of the world around me, my articles will be more of a personal, strictly subjective, view on either art, design, photography, people, events, and so on, in which I have some interest one way or another. Sometimes I go out to look for something interesting, like this time, what I found is a guy who I got to know quite well (on a surface level) over the past 7 years.

What started out as a friend of a friend, turned into the guy that gave me free drinks every time I ordered something at the bar where he worked. God knows why he did this, we hardly knew each other, and although we did exchange a few words whenever we had the chance, there were no particularly clear reasons for giving me those free drinks. Maybe subconsciously he was on ‘display’ already in those days, working hard to make ‘new’ friends and other acquaintances and if this was his goal then what’s a better place to work than a bar? 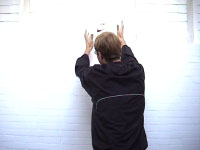 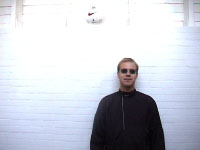 The guy I’m talking about is Dutch ‘artist’ Gijs Muller, also know as ‘your newest friend’, at least this is what one of his latest projects was called. He is however still looking for new friends wherever he can. While doing this project the Dutch advertising organization ADCN (Art Directors Club Nederland) decided to use him to promote the annual Dutch advertising festival by making Gijs famous within a matter of weeks, they funded most of his promotional material, even paying for commercials on television, all promoting Gijs Muller as Your newest friend. On the day of the actual festival it became clear what had happened when Gijs appeared as the presenter of the festival, delivering a speech on why people should become his ‘new friends’. Ok, so what’s he trying to pull off?

Gijs is art, so he claims, or maybe I should rephrase that into Gijs takes part in art (read: life), but a life that he stages to a certain extent. Up to the point where art/life starts to go its own way again and no one can tell anymore whether it’s real or not. Is this being staged? Or have I become who I have claimed to be? I have not become anyone, I am who I say I am. No, wait, I am who people think I am! Yes, that’s it, that’s who I am. I am what people think I am, and when a new challenge comes along I will convince them (the people) that I am now someone new.

Confused? You should be, at least a little. This is what it’s all about and as I have said in the beginning of this article I am only a subjective ‘passer by’ who is trying to put into words what I see Gijs doing with his art. Gijs said to me: “I was giving a lecture the other day to a group of students and after I finished my story the only question that remained was: have I just spoken the truth or was it all a big lie? Ok, so I’ve confused some people but it’s a legitimate question, I have become your newest friend only because I claimed to be your newest friend, I had the necessary media support by appearing on TV and posters, some magazine covers even, but ultimately what am I? I am what I claimed to be, your newest friend, not because people recognized me as such but because I made the people recognize me as such.” Summing up Gijs is looking to become the world’s most successful self-made man. 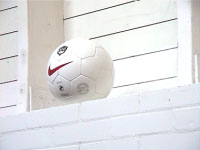 Hence his next project, as it will come as no surprise that Gijs has now chosen yet another direction by attempting to become a famous athlete in the next few months, in fact he may even try to win the ‘Dutch Athlete of the Year’ award. At present time he has started his training and is determining his, no doubt, ‘winning’ strategy on how to become the next big famous athlete. Gijs confessed to me that never before he has participated in any sport until now, but that he has no trouble, so far, with his rigid ‘rocky’ like training schedule. He has quit smoking and (most) of his drinking, bought at new training outfit and running shoes. Also he managed to get his hands on a jumping rope and a soccer ball. For the next months his aim will be to find sponsors to fund his daring endeavor and to work-out relentlessly at all times without too many distractions from the outside world.

In order to achieve all this some important phone calls to potential sponsors have been made and he has moved into a new home situated in an Amsterdam suburb where he will not be disturbed by anything reminding him of life in the Amsterdam inner-city. His only contacts with the world he knows so well are his computer and last but not least his caring girlfriend Nikki, who comes around every so often to support him during this strenuous but challenging new project.

My personal aim is to follow Gijs in the following months from up close in order to bring you the latest gossip and of course his advancements and victories in the world of professional sports. Next time I will go more in depth into his reasoning for doing this project as I imagine it must have something to with ‘intellectual strength vs. mental strength’ or a similarly interesting combination of reasons. So I leave you now with a small movie made from the first footage that was shot from Gijs as an athlete and some stills from the same session. Mind you that I am just discovering the world of moving images and that I am a total amateur at using i-Movie so bear with me for the time being until I master the fine art of editing.