So you believe in the existence of UFOs?

“Yes I do. Even though that which interests me is to see how much the perspective of their existence generates a new collective imagery. There is something mystical in the faith of the aliens. Fears and hopes are projected like in the Christian faith. The fear of divine punishment and the hope of eternal salvation.” 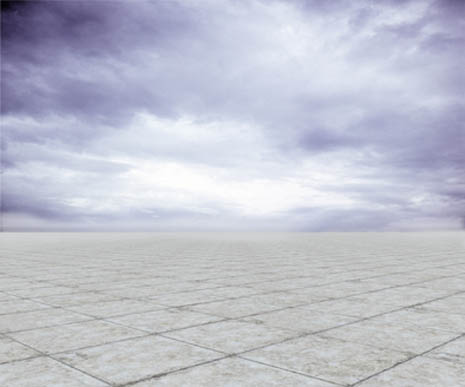 The deserts series was called by Sarah Ciraci: ‘Not Even Background Noises’, because they are silent places, full of emptiness. They come about with a process which increasingly subtracts the physical elements from the spaces which she photographs, sometimes using prints from catalogues or books which she then modifies. It has never been important the relationship with the specific physical place, they refer to a geography of thought rather than a territory. They end up as metaphorical places in which to find personal points of reference, those co-ordinates that do not seem visible and despite the strong tendency towards the artificial, seek peace.

One hears books such as ‘The Atrocity Exhibition’ by James Ballard, from which Sarah says she created ‘Cemento’. Stories in which places made of industrial materials have taken the upper hand, but subtracted from the tendency to technological feticism which one reads in Ballard.

“Probably the idea to modify landscapes is related to the city in which I grew up in. In Taranto there is a large steel industry and there I saw the most spectacular sunsets. The relationship of nature with man. The toxic gases in contact with the light create an indescribable tonality of colour, even if they are poisonous”. 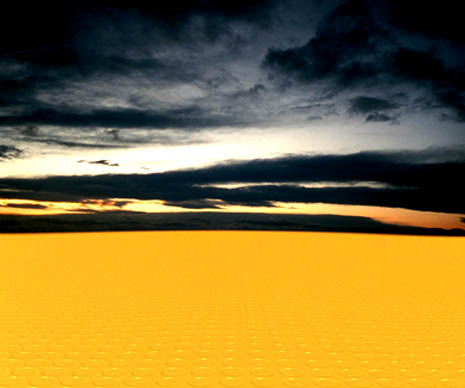 You talked to me about the famous book by Philip K Dick: ‘Do Androids Dream of Electric Sheep’, on which Ridley Scott based his 1982 film ‘Blade Runner’. The book tells of the great ambition of humans to possess a domestic animal and seen the scarcity of classic house pets the decision to build electric sheep, hence the title of the book.

The limit between the artificial and the natural has always been part of the Western tradition and of the great themes of philosophical thought up until when the culture of our time accepted the impossibility of maintaining it. Nature has not been able to conserve an untouchable order and for Sarah Ciraci this is significant of the prevarication of the artificial. Her landscapes are like alternative copies of reality, as if she were looking at the world through bionic eyes which transmute the natural colours into synthetic colours and elements of nature into artificial elements. 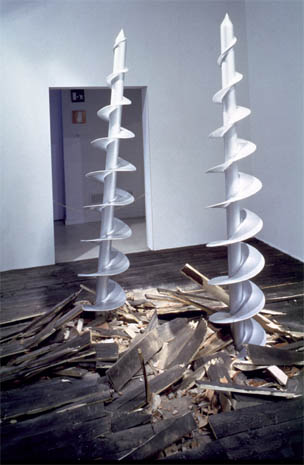 The atmospheres of her work have always had a certain taste for the apocalyptic, almost as if they were scenes of post nuclear destruction: what has remained after a millennium tragedy. ‘Question of Time’ is a piece made for the exhibition Campo 6 held at the Gallery of Modern Art in Turin. Two drills which dominate from underground undermine the pavement, one of the few pieces which holds in it a sense of unresolved unrest. In the other works it seems instead that, despite the scene, there is a certain serenity behind it and one perceives an atmosphere which is almost harmonious.