When facing the work of Studio Azzurro, the public’s reactions are unexpected; the enthusiastic respond with a performance of their own, whilst the more timid try hard to hide their burning desire to get involved. There is shouting, clapping, active participation, silence and observance. 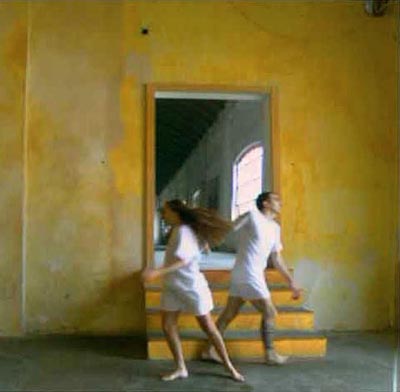 Scenes and actions from the installation Landing talk

“We entered into this new arena with our own very personal project, a broad spectrum of intentions, while making sure to avoid chasing after any particular objectives thay might have been dictated by recent technological advances. Particularly in the use of interactive elements such as sound and imagery that reacts and creates a dialogue with the public we have two clear goals in mind: to create spaces for collective use, and to use natural interfaces. We set ourselves these two objectives in the hope that they might provide the grounding for the formulation of a new form of narration discussed on more planes and higher sensorial levels. The lack of socialization appeared to us as a weak link in these new technologies that, on the whole tend to exasperate their individual offering. We decided therefore to create environments where choices are made by several partecipants, where the storyline is collectively decided upon, where the relationship among individuals is more important than the ralationship between individuals and machine. This is the idea behind we termed ‘sensitive environments’. We also tried to minimize the overt presence of the technological equipment, and favour ‘natural interfaces’, eliminating such elements as the mouse and the keyboard and examining the possibility of using means of communication that are relatively common and do not rely on any symbolic transposition, such as touching, treading, making sounds. This was intended as a way of bringing people closer together in their participation in the experience, leaving room for communication between audience member and a more spontaneous sensorial reaction to the events unfolding around them. In a way -and we say this with due respect – we tried to do exactly the opposite of what Duchamp did. We are attempting to make work’s of art that relate directly to people’s behavior, and transform this behaviour into a part of the artistic experience, rather than extrapolating an object from its daily use and transferring it directly into an artistic context”. 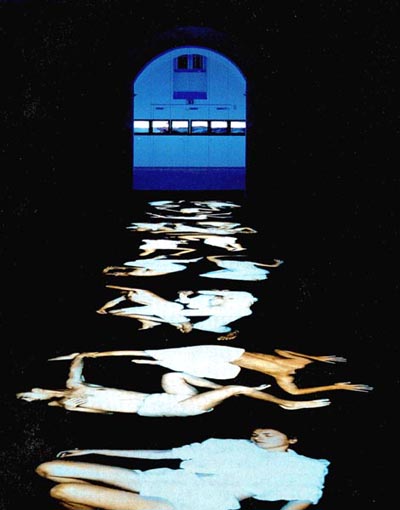 Image from the interactive installations Il Nuotatore and Coro

One of the projects by Studio Azzurro is ‘The Mnemonist’, the story of a man who cannot forget anything going back even to the start of his life. In this way, in every living moment all images are constantly linked to others, to smells and to sensations. The protagonist creates and endures an infinite prison of memory, a complex architecture of mechanisms and paths.

“In our experiences with interactive installations the narration is not sequential like time, but is segmented and combined. We believe this to be more like the way memory manifests itself in us.”