Sonar hardly needs any introductions but here’s a little one all the same. We all know it as Sonar, but its full name is: International Advanced Music and Multimedia Art Festival of Barcelona. Its eighth edition took place on the 14th, 15th and 16th of June, in two main areas. The first one’s Sonar by day, at the CCCB The Barcelona Contemporary Culture Centre and the Macba Contemporary Art museum of Barcelona, with concerts, DJ sessions, conferences, experimental cinema, video-art, graphic design, net-art, and a pro area with publications, record labels and more. And then Sonar by night in La Fira 2, in Hospitalet, on the outskirts of Barcelona, with plenty of room for proper music and partying. Make no mistake: this is no camping affair. It’s an urban festival and there’s no roughing it: you turn up showered, well-fed and impeccably made up. We are in Barcelona after all and few people are as Glam as the Catalans. Spain is different. And so is Sonar. 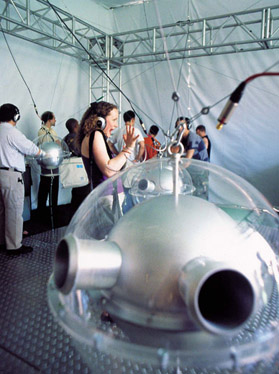 Like most things in life, things come, and things go. It’s been one more Sonar for those of us who are devoted fans and a revelation for the many newcomers. This eighth edition has been a total success with more than 80,000 people turning up over three days and three nights. The organisation predicted a human avalanche and relocated Sonar by night to new bigger premises, but what they hadn’t predicted was that Sonar by day would also get a little claustrophobic. They already announced that next year they will look for a new daytime setting in order to prevent overcrowding. Personally so much expansion frightens me a bit. When something which started out as underground as this festival gets this big, you need to get your priorities straight in order not to get swamped by commercialism. Around 6000 people attended the first Sonar in 1994. The growth has been colossal over 8 years. But it looks as though the people from Sonar do have their priorities straight. They adapt to the demand but the philosophy remains the same: To offer the most up-to-date and innovative vision possible, whether it’s on the national or the international scene. This year, for want of big stars, (or with unusual headliners like Sonic Youth), they have got a whole host of new and experimental music on offer. The exception being the ever-regulars like Jeff Mills, Laurent Garnier and Richie Hawtin, (many a joke were made about the matter, since they never fail to turn up for their slot at the festival, but have a bit of a reputation for churning out the same old stuff every time).

After the festival come the hangovers, the exhaustion, reviewing what was on show and moaning about the stuff you haven’t had time to see. I must confess that my memories of the night time performances are a little hazy: Sonar has been known to cause such memory lapses. Many anecdotes could be told, but I recall one in particular: On Friday, once the night time session had ended, some well organised person pulled up to the entrance of the building in their car. Inside the car were a generator, amps, decks and vinyl. Hundreds of people continued the festival outside. Beware: Sonar never sleeps.