Ken Ishii is one of the pioneer of Japanese techno. His activities are not limited to the ‘techno’ field. His long-awaited new album ‘Flatspin‘ includes the soundtrack for the movie ‘White Out’ (directed by Setsurou Wakamatsu, starring Yuji Oda) which will be released on August 18th. It is not too much to say that this album is ‘a complete compilation of his works’. He just visited Sapporo for a live performance. We interviewed him about his new approach for the sound track and his roots while he was in Sapporo. 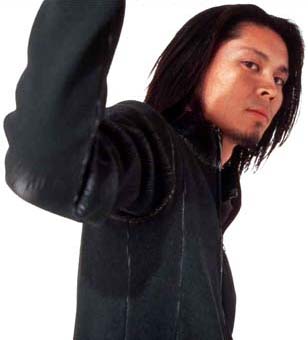 My grandparents are living in Sapporo and I’ve often come to Sapporo since my childhood. I was born in a hospital in Sapporo, I’ve never lived here though. Sapporo has a functions as a city and has many works of art. Everyone can easily see nature in the suburbs. I like the size of the city.

It’s almost impossible to compare Japan with many other countries, but there are subtle differences. I was actually in the Netherlands a few days ago to play at a Jazz Festival. It was a huge open-air concert like a rave. People were basically open-minded and when I was playing together with sax player Dulfer, everyone – from guys to old ladies – were standing and dancing. The response was very favorable and I fully enjoyed playing as a musician. Good music can make a good response regardless of the genre. It’s always great to play at a good place in any country.

Do you think the environment in other countries is better than in Japan?

Producing an album and playing as a DJ. Do you think they are two different things for you?

It must be. When I produce an album, I usually start thinking of how to express the ideas in my mind, and when I play as a DJ, I try to enjoy the dance floor.

The new single is a soundtrack for the movie ‘White Out’. Was there any production differences compared to your usual method?

Basically, I can do everything when I produce a normal album, but many people are involved in producing a soundtrack, so I have to think of how I can include my style in it. It’s a different attitude. For this sound rack, I was asked to produce tracks suitable to each scene, so I tried to be conscious of the scenario, but now I’m sure I could put my style in it.

Please tell us about the full soundtrack album released in August.

In the previous album, ‘Sleeping Madness‘, I collaborated with non-techno/electric artists in a new attempt, but this album includes a soundtrack and I felt like half of them were not me. I was given the main theme of the movie and I tried to think of how to make other tracks based on the theme. It was like an impulse from my early days of techno music. For these years, I’ve found power in a new style of techno, but now I feel like I went back to the starting point. I think this is the most techno-style album. It’s a kind of compilation of my techno music.