In four short years, Resfest has managed to become the epicenter of digital filmmaking. Not only the festival features some of the world’s finest designers and filmmakers, the art direction of the festival itself deserves a recognition. The man behind the scenes is Colin Metcalf, the art director for Resfest since its beginning. He has been creating a wide range of out-of-the-ordinary imagery, typefaces, and designs. In this feature, we asked Colin how he got started, how he approaches his work, and what he thinks about the world at large.

Could you tell us a little about your background and how you got involved in Resfest?

My education is actually in Journalism with a second degree in Painting. After I graduated, I moved to London, where I spent the next three years honing in on what I wanted to do. I was a little aimless at that point. I spent the first year working at a graphic arts supply shop in Covent Garden, and the next two in an illustration studio that was subordinate to a large ad agency. I saw one of my friends getting involved in graphic design, and though it had always been right in front of me, it was then that I decided specifically to become a designer. The mixing of type and image seemed a perfect niche for someone trained in both writing and painting.

Eventually, I moved back to Chicago, which is where I’m from, and found myself working with Carlos Segura, T-26, whose work I had admired from afar. Carlos had given a presentation on the West Coast in 1996, and Jonathan Wells happened to be in the audience. Jonathan, (who is now my business partner and the Festival Director for Resfest), had just co-founded a grassroots digital film festival called "Low Res" in San Francisco, and was in need of a graphic identity. The kind of art-driven design that we did at Segura Inc. seemed a natural fit. A mutual friend (and work colleague of mine) introduced us, and so it all began. 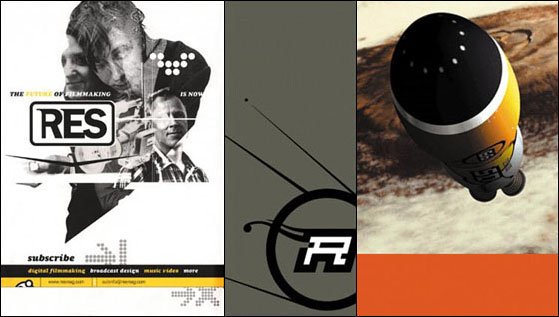 What do your responsibilities include as art director of Resfest?

I’ve been pretty much a one-man studio for the past four years for all things bearing the names RES and Resfest. We usually partner on the interactive and film end of things, though, as my expertise doesn’t lie there yet. All of my partners and I have assumed multiple workloads. Eight hours is a short day for us, a coffee break seems like a vacation. 🙂

What are your influences and inspirations?

It comes from all around. Land patterns viewed from an airplane window, the handles on a 200 year-old Chinese cabinet, a fragment of conversation, my dreams, a misperceived image viewed upside-down or from a distance. Childhood fascinations play their part as well: rockets, airplanes and machines. Virtuosity in work is the ultimate goal. Some people are happy being directors of a process, and there’s merit to that. It’s an efficient way to conduct a project. But I want to do everything, which is both my driving strength and probably my Achilles heel.

As far as inspirational people go, those who have been most influential to me are usually those I know personally. Kevin Grady, who I followed into this field, is an amazing designer with incredible focus. My friend Jim Marcus, who is variously a musician, sound engineer, programmer, designer, typographer, poet, painter, etc., is the absolute embodiment of virtuosity to a point it’s actually disturbing. And Carlos Segura actively encouraged me down my own path when a lot of design icons would have rather directed me along their own.