The first issue of the New Year and also the commemorative 50th issue of Shift features a cover design by a design agency ‘One9ine‘ headed by Matt Owens and Warren Corbitt.

‘One9ine’ composed of Matt Owens, Warren Corbitt, Lee Misenheimer and Dan Ellis is one of the leading design studios in New York. While they’ve been doing lots of client work for clients such as Nike, Moma, National Geographic and ESPN, they’re always trying to push the design scene with innovative ideas. 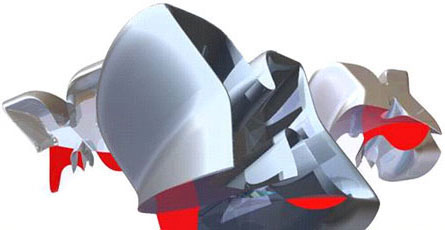 How did you get your start in design?

Matt Owens: I started getting into design through being into music and involved in putting out records and doing flyers in high school and college. Dischord Records and the design work of Jason Farrell, Jeff Nelson and Chris Bald was very inspirational to me early on. When I got into college, I started taking design classes and just kept doing it. I went to grad school right after school and really learned a lot about working through ideas. I am still really involved in music and try to contribute to the music and scene I believe as much as I can.

Warren Corbitt: I guess it all started in high school. I was the editor of the high school – and one of the responsibilities was to layout the issue. This was back in the day of repro, rubylith, and crosshairs on acetate. I was heavily into the “new wave” mid 80’s thing – and the covers of New Order and pages on Interview were tacked to my bedroom wall. Through a few different turns down the academic way – I ended up back doing what I had always been drawn to.

Lee Misenheimer: Well early on, I was headed down the illustration path. My education was really more fine art driven but peppered with a bit of graphic design. However, design was really more of a means to create zines and show flyers showcasing my artwork. I began to develop an interest in interactive design at the end of my college run primarily in Director and continued with interactive design as a job after graduating. luckily the web kinda blew up and I transitioned my interactive design accordingly. All the while i had been doing a lot of my own creative work, design and illustration in a personal site called Destroy Rockcity. I think this outlet has really helped me experiment and develop how I have approached visual communication over the years.

One9ine is three full time designers and a few part time. As a member of a small studio, how do you feel about the current state of design – online and offline?

M: Design is in an interesting place. You have new design magazines like ‘One’ that are making a huge parody out of the design discipline, trivializing it in a way (Eames chair as fashion accessory). At the same time, you have online designers taking design to new places (Submethod, Kioken, Choppingblock) and you have broadcast designers taking things to a whole new level. I think that design as a foundation is still fundamentally important to doing good work in any medium.

W: Design is really omni-present at this stage. People growing up starting in our generation – and continuing on down the Gen x to Gen y to gen (…) timeline- are much more visually sophisticated and aware than previous generations. I mean you’ve got kids out there now who are able to handle visual input from video games, tv, the internet [and one would hope books] at a much earlier age. The sign-signifier debate is no longer confined to semiotic debates in the ivory tower. Its being played out in billboards and commercials.
That said – and I suppose this point will rear its head in many of the responses – is that I am not convinced that all the signs being put out there are attached to intended thoughts/goals. I am not sure how much thought is going into alot of the work I see out there – both on and offline. Hands down there are a ton of extremely talented formal visual makers out there. unfortunately I am not sure I know what it all means – as well as not sure if the maker is aware of what he/she is communicating.

L: Hmmm, I guess I don’t usually think about the “state of design” too much. As far as online design goes, there seems to be a lot of cool visual stuff going on out there, but at the same time, maybe a lack of big ideas. The skill set out there is tremendous and there’s an amazing amount of potential! 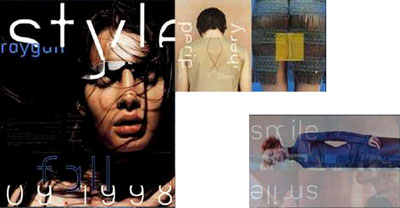 What is your education? Do you feel that having a college degree is still important in design? Do you think the internet has made design education obsolete?

M: I have an undergraduate and graduate degree in design. I think being knowledgeable of design history and the lineage of design is super important in getting a handle on what has come before. For learning technology, an educational setting may not be that great. I have learned more since I got out of school than when I was in school. I think now, you have to be a self-starter and really get out there and learn on your own but design fundamentals will always be important.

W: I got a B.A. in political theory from Vassar college. I focused largely on poststructuralistm and sexual identity politics. Did a lot of Foucault and Hegel. In 1997 began studies towards an MFA in Graphic Design from Cranbrook Academy of Art under Laurie and P.Scott Makela. I wouldn’t necessarily say that a college degree is essential o be a good graphic designer. But what I would say is that being able to think – to problem solve – and to realize that the expected way of doing things is not always the correct or most expedient means is critical to good design. I didn’t study design in undergrad – but I did learn how to think – to formulate an argument – and in some ways [hopefully] to think out of the “box.” I don’t think the ivy covered walls are necessary – but being part of a community with a shared goal of academic discovery makes it much easier and in some ways more enjoyable. I’ve often called Cranbrook the “Club Med of Graphic Design” because it is a space that you have the luxury to attend for two years to focus on nothing but your own relationship with design and communication. It is far from easy – but to have the freedom away from clients and the “9-5” – allows the students fully immerse themselves in the exploration at hand.

L: BFA Illustration from the East Carolina University School of Art. I don’t really think a college degree is completely necessary. Though the experience does expose you to a lot of big ideas, new and old. Whether it’s from an intense curriculum or that shared creative existence that can begin to set things in motion. I think that it can certainly help fuel the creation of “big ideas” for oneself.