On the other hand, ideas and ways to innovate the interactive design itself such as the possibility of art and new meaning of interactive design using computers, and education to bring it into something hybrid were also brought up for discussion. 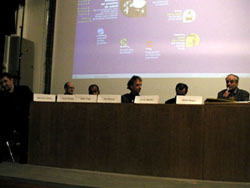 Catherine Lutz-Walthard based in Switzerland presented her activity to try to establish schools where everyone could do ordinary creations with real relevance for each area in each part of Europe, and also presented her process to make the interactive image real by taking a a firm hold on each local area as a culture. Also, Pelle Ehn who has been engaged in establishment of ‘Digital Bauhaus’ as a professor at the Malm University, Sweden presented his idea of ‘Digital Bauhaus’ as a new playground of digital design, from his viewpoint that it would be impossible to develop interactive design as aesthetics or culture if there was no environment where one could create interactive design based on technologies and designs as education.

How designers should be in interactive design. As a model of their attitude, the subject ‘education’ made the point at issue easy to understand, but there was a speaker who suggested about the attitude itself. Minna Tarkka, the associate professor at University of Art and Design, Helsinki, has played an active part to establish the media culture center in Helsinki. She indicated that the process connects users with computer should be the basis of interactive design. Then she declared that sociality and sociability of what the interface could communicate were more necessary rather than art. 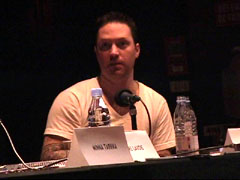 Among all speakers, we shouldn’t forget there was one speaker who livened up the discussion and impressed the audience favorably while uniting those melting debate. It was Joshua Davis, a specialist in web design based in New York, who has developed self-produced web design projects. He simply presented what he could while making a thorough investigation of the results. By doing this, responses and discussions emerged and it might be meaningless to simply review the meaning. He commented that you could do interactive design without a deep knowledge about technologies, but you should take a listen to the comments on your work to make your work good.